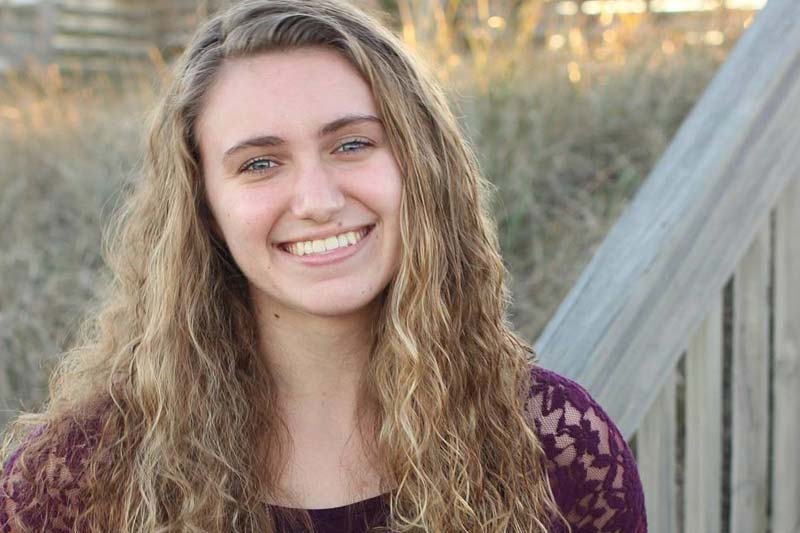 When Megan Munson, ’18, arrived at Meredith College, she had her mind set on being a teacher, getting involved in student government, and making an impact on campus. And she accomplished all of these goals.

“I was drawn to [Meredith] because of the Teaching Fellows Program,” said Megan. “When I was in high school, I was pretty sure that I wanted to be a teacher, so I felt that if I was going to be a teacher than I want to go to the best place for teaching.”

As an English major obtaining a 6-9 teaching licensure, Megan plans to work as a middle school language arts teacher. During her freshman year, she was 95 percent sure that she wanted to teach but wasn’t sure whether she wanted to work in an elementary or middle school. Her study abroad trip to Belize that summer with Meredith solidified her decision.

“What drew me to that program was that I could work in a K-8 school in Belize. The opportunity to be in a kindergarten through eighth grade school was to me, perfect,” said Megan. “Dr. Kelly Roberts, my study abroad coordinator, encouraged me to work with students of all grade levels.”

Because Megan hadn’t taken any educational courses yet, she was hesitant about teaching in the classroom while in Belize. She spent the majority of her time reading with students one-on-one. A few days before the end of the program Roberts encouraged Megan to teach a lesson in the classroom.

“I wasn’t sure that I was ready, but Dr. Roberts really encouraged me by saying ‘you are in Belize, you are never going to have this opportunity again. Just go for it and embrace it’,” said Megan. “The next day I taught a lesson on plot structure to an eighth grade class and I rocked it. I felt like a rock star. Blood was racing through my veins. That was it. I had found what it was that I wanted to do.”

As a youth group intern at Duck United Methodist Church in Duck, N.C., Megan learned a lot about how to interact with middle school students and their parents, which helped her significantly with her student teaching position at Holly Grove Middle School.

Aside from her teaching aspirations, the Teaching Fellow has made an impact on the Meredith campus through the Student Government Association (SGA). Megan served on Senate for three years as a class senator before taking on a bigger role. She now serves as SGA vice president.

“Transitioning from a student to a student government officer is so empowering because there were issues that I saw on campus that I was trying to resolve, and I finally had the chance to do something about it,” said Megan.

For example, working with her executive board, the Meredith events director, and the grounds team, Megan was able to help improve the lighting on campus.

As an Honors Scholar, Megan has held several leadership positions within the Honors Program. She is also a member of Kappa Delta Pi, Alpha Lambda Delta International Honor Society, Silver Shield, and Sigma Tau Delta, where she served as president last year.

“With positivity as one of my strengths, I definitely think that I am the strong leader that I am because I try to be as optimistic as possible in any situation,” said Megan. “I try to see the good in people and listen to everyone. I am trained to always look for that positive outcome and that positive result.”

Megan used her passion for writing and teaching in the Learning Center where she worked as a writing and English tutor for three years. Through that experience, Megan learned how to interact with students one-on-one, how to make sure everyone understood the material, and she became a lot more patient and understanding. All are skills that will be valuable as she embarks on her career as a teacher.

After graduation, Megan accepted a position in the Wake County Public School System as a middle school English teacher. She feels that Meredith has prepared her to be a successful educator.

“My experience at Meredith has made me a much stronger and more confident person, as a teacher and as a student. I’ve become more enriched and even stronger. I’m a better leader. And I’ve become a more effective communicator. I wouldn’t take back this time for anything.”