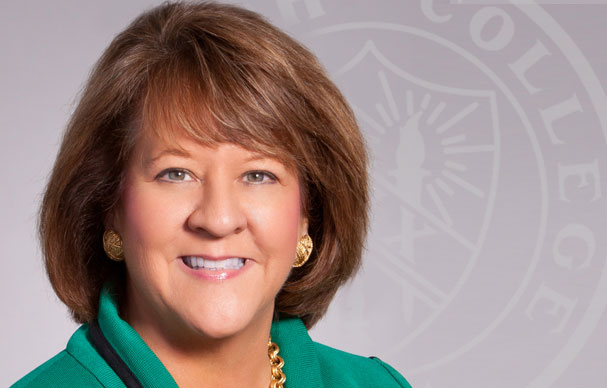 Jo Allen, Ph.D., Meredith College Class of 1980, took office as the eighth president of the College on July 1, 2011. She is the first Meredith College alumna to assume leadership of the 129-year-old institution, one of the largest private colleges for women in the United States. Allen brought her extensive experience as a faculty member, administrator, and scholar to her current role.

Since taking office, President Allen has guided Meredith to an enviable position of strength and vitality. After leading a collaborative, community-wide process to develop a comprehensive strategic plan, Meredith Forever, Allen and the Executive Leadership Team oversaw its implementation with impressive results. In the seven years since the rolling plan was put in place, Meredith has exceeded enrollment and retention goals; raised more than $90 million in Beyond Strong, its largest fundraising campaign ever; earned the highest rating from the U.S. Department of Education for financial stability; launched the Going Strong brand initiative; established StrongPoints®, the College’s signature coaching and personal advising program; created a personal and professional development program for women called Stronger U; and completed or initiated renovations on buildings and infrastructure across campus, including Johnson Hall, the College’s most iconic building.

A North Carolina native, Allen earned her Master’s degree from East Carolina University and her doctorate from Oklahoma State University. Both her M.A. and her Ph.D. are in English literature, with an emphasis in Technical and Professional Communication. Her B.A. from Meredith is also in English. She served as tenured associate professor of English at East Carolina University and tenured associate professor at North Carolina State University in addition to her administrative roles. Dr. Allen was an American Council on Education Fellow at the University of Virginia.

Allen previously served as senior vice president and provost, and tenured professor of English, at Widener University, in Chester, Pa. There she oversaw academic and student affairs on four campuses in two states for approximately 6,500 students and more than 700 full- and part-time faculty. Other leadership positions held by Allen at East Carolina University and at North Carolina State University include special assistant positions for various projects, as well as associate vice provost and interim vice provost.

Allen has made numerous contributions to the advancement of higher education. She has been the featured speaker and facilitator at programs including the American Council on Education Chief Academic Officer’s Institute and the Pennsylvania State University's Academic Leadership Academy. She has also served as president of the Association of Teachers of Technical Writing, the largest international scholarly organization for technical and professional communication scholars. She was a Commissioner for Middle States Commission on Higher Education, for whom she also led training workshops on assessment and led site visits for regional and international institutions’ accreditation. She also served on the Board of Trustees and has been a frequent site reviewer for the Southern Association of Colleges and Schools (SACS) Commission on Colleges.  She has been a site reviewer for the American Bar Association.  She also served on the board of the Association of American Colleges of Teacher Education.

President Allen has published and presented in more than 200 regional, national, and international scholarly venues, focusing on communication, assessment, and leadership in higher education. Books written or edited by Allen include Writing in the Workplace and Assessment in Technical and Professional Communication, which won the Council of Program’s in Technical and Scientific Communication’s 2010 award for best contribution to the work of program assessment. The book also won the 2012 College Composition and Communication Award for best collection of original essays about assessment of professional communication. In addition to publishing her own work extensively in the form of chapters in scholarly books, articles reprinted in books, peer reviewed articles, and articles in higher education publications, Allen has been a reviewer for scholarly journals and has co-edited several special journal issues of Technical Communication Quarterly.

She has been recognized by Meredith College as a Distinguished Alumna and by East Carolina University as an Outstanding Woman of ECU.

Currently, she is chair of the Executive Board and serves on the Audit Committee and the Administration Committee for the National Association of Independent Colleges and Universities (NAICU). She is also the past treasurer and current vice chair of the North Carolina Independent Colleges and Universities (NCICU). She serves on the Presidents’ Council of the Cooperating Raleigh Colleges and on the Presidents' Council of USA South, Meredith's athletic conference. In addition, she is a member of the Raleigh Chamber of Commerce Board of Advisors.