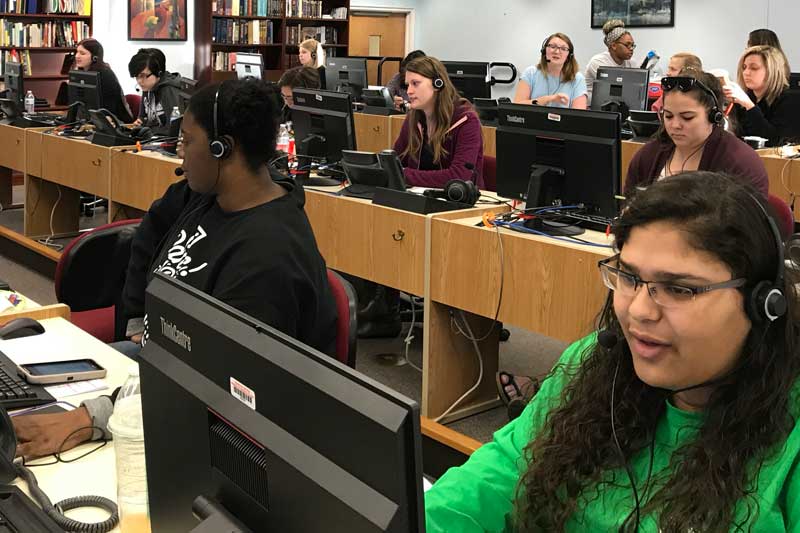 The Meredith Poll was created to help students develop skills that will assist them at Meredith and in their careers. Since the Poll’s founding in 2015, students have been involved in the construction of the surveys, data collection and analysis, and promotion of the results.

Skills Gained
The critical thinking, quantitative reasoning, and communication skills developed through participating in the Meredith Poll help students in their careers, whether those careers are in politics or not.

While many of the students who work on the Meredith Poll are political science majors, the poll attracts students from a variety of majors—Business Administration, Communication, History, International Studies, Math, Psychology, and more. Some have done call center jobs, but many join the Meredith Poll without any experience in survey research or professional calling.

Academic Impact
Most students regularly work on the Meredith Poll, asking to return the next time one is conducted. Some develop their thesis topics around the Poll and its results:

Political Science major Cristy Villalobos, ’17, became interested in the Voter ID issue in one of her classes and knew that one of the fall polls in her senior year was going to be asking North Carolinians about their perceptions of Voter ID. She suggested several questions related to the idea of voter fraud and whether people thought that presenting an official state identification card at the polling place would reduce voter fraud. After participating as a caller, Cristy took the poll results and ran many statistical tests on the data, eventually writing her senior thesis on how different demographic groups viewed the impact of the Voter ID. After writing her thesis, she presented a paper at the North Carolina Political Science Association Annual Meeting and won the best undergraduate paper award from the Association.

Samantha Wilkins, ’18, who majored in Psychology and Political Science, was always interested in public policy around mental health issues. She knew from her courses in both areas that many people in North Carolina had little access to mental health care and that these people and others suffered because of this lack of access. As the North Carolina General Assembly session was beginning in Spring 2017, Samantha asked if some questions could be included on the Meredith Poll to gauge people’s understanding of the mental health policy and their support for new laws and increased state spending to improve access to health services for people in need. She helped draft some questions for the Poll and, like Cristy, was involved in all stages of the Poll’s implementation. Samantha produced her thesis in psychology using Meredith Poll data and, ultimately presented her findings at Meredith’s Celebrating Student Achievement Day and at the North Carolina Political Science Association.

Related Coursework
The Political Science Program offers several courses that help students understand the value of polling and how to conduct polls in an ethical manner: