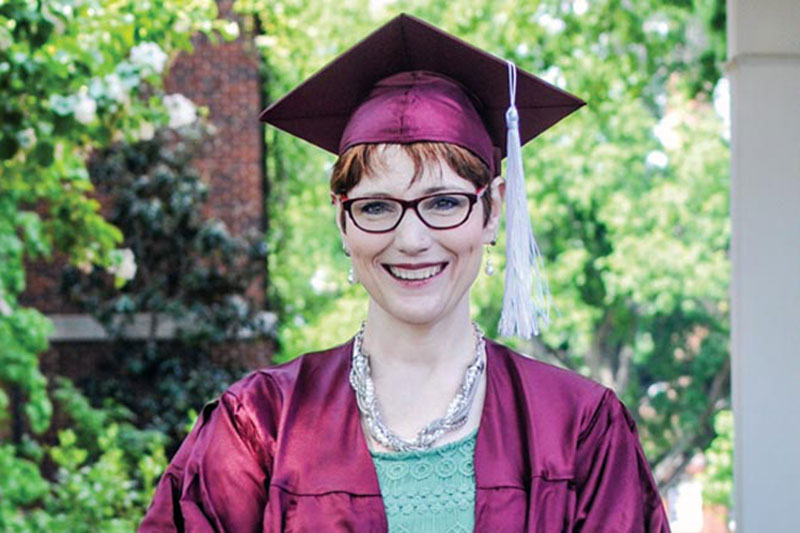 As a Wings student and triple major, Tina Salmon, ’17, explored her intellectual passions at Meredith. And having faced numerous personal challenges, including a devastating car accident, Tina knows just how strong she is.

She’ll use that knowledge as she pursues her graduate degree at the University of Southern California Suzanne Dworak-Peck School of Social Work, where she plans to study adults and healthy aging. Ultimately, she plans to work in gerontology and promote policy changes for populations in need.

Majoring in social work, psychology, and religious and ethical studies, Tina’s experiences at Meredith were robust and varied. She held internships, conducted an independent study examining anti-Semitism in European and American movies, and completed a field placement in Wake County. Along the way, she gained confidence, expanded her leadership skills, and learned that she has a gift for advocacy.

“One of the biggest ways Meredith has prepared me is by helping me to find my voice. I have learned that I not only can, but want to advocate for the rights of others.”

Tina’s growth as a leader came about both through leadership training and by taking on leadership roles. She was active in WINGS, Meredith’s student organization for adult students, having served as vice president, president, and WINGS chair on the student government association. Some of Tina’s favorite memories come from her involvement with WINGS.

“My most memorable times are the gatherings we’ve had, the friendships I’ve built, the tears we’ve shared, and the support I have not only received but been able to provide as a leader in WINGS, and as an adult and transfer adviser.”

She coordinated Sexual Assault Awareness week, completed the Emerging Leaders Program, attended LeaderShape, and was chosen to attend a leadership conference at The Citadel in South Carolina. She also went to Washington, D.C., with No Labels, a non-partisan, social welfare advocacy organization.

“I was given the opportunity to meet with a variety of Congressional men and women, the Speaker of the House, and I marched on Capitol Hill with approximately 1,800 individuals who would like to see political officials ‘Fix and not Fight.’”

Tina’s journey has not been easy. During her first semester, her husband had a massive heart attack, which led her to take a leave of absence, returning after a year. Throughout her studies, Tina has worked from 2–7 a.m. to support her family, seven days a week. And in her junior year, Tina and her daughter were rear-ended by a drunk driver. She suffered serious injuries including a brain injury, broken neck and spine, and concussion; her daughter was also seriously injured. Tina took incompletes in all of her classes, but with support from faculty and staff, was able to make up the work and graduate on time.

That support has been critical for Tina’s success. As a triple major, she has developed close relationships with faculty in each of her areas of study; she has also connected with staff and administrators across campus, who have helped her stay the path despite the obstacles she encountered.

“I could probably write all day about how the staff and faculty have enriched my experience and prepared me to succeed. It is because of each one of them that I have no doubt I can continue my journey after Meredith College.”

Tina knew from the moment she stepped on campus that she was meant to be at Meredith. And while she made deep connections with her fellow Wings students, she always felt a part of the larger community, too. She loved feeling comfortable speaking freely in the classroom about women’s issues, and enjoyed hearing her classmates’ perspectives.

“Age does not matter at Meredith. I have been accepted just the way I am. The relationships I have been able to build were because we all share something in common: a true sisterhood.”