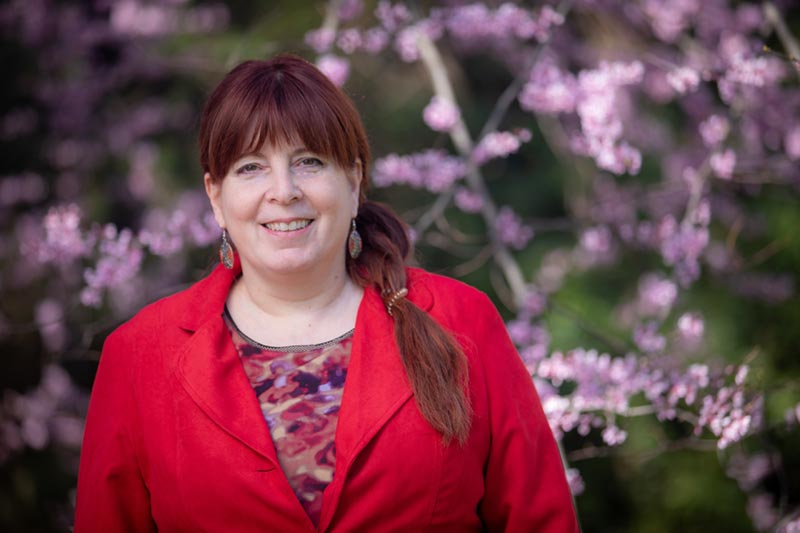 “I chose the Marine Corps because, for most of my life, I was the smallest of my five siblings and I wanted to prove something,” said Sheila. “I wanted to be a tough guy and prove that I could do this.”

What makes Sheila strong is her innate determination. She is always wanting to do things outside of the norm, things that are unusual for a woman of her age. Having a community that supported her passions and goals only made her more determined to succeed as an adult student.

“You can be as determined as you want to be, but if you don’t have the right people around you, and a strong support system, it can be discouraging. Having an innate determination and support of that determination, anything is possible. My support comes from my husband and the people at Meredith.”

Director of Wings Tom Manning is one of those people. He has been one of Sheila’s biggest supporters throughout her time at Meredith. He always encouraged her, helped her redefine her goals and why she came to Meredith, and would make her feel like she was the only one who mattered.

Meredith’s support led her to study abroad in Sansepolcro, Italy, one of her most memorable experiences.

“Oh my goodness was that powerful,” said Sheila. “I traveled every weekend and even stayed 10 extra days, visiting Rome, Poland, Venice, London, and Paris. That trip will be with me for the rest of my life. The study abroad program really had a profound impact on me.”

Aside from the study abroad program, one of the things Sheila enjoys most about Meredith is the effort the College puts into bringing female leaders on campus to encourage and inspire the next generation.

“I love Gloria Steinem and some of the other women who came to Jones Auditorium. How powerful,” said Sheila. “These women are awesome examples beyond the scope of Meredith – passed legislators, movie stars, and famous authors. It’s so encouraging to have those examples given to us, showing us this is what you can do, this is where you can go, and this is what you can be.”

StrongPoints® was very instrumental for Sheila. She already knew what her strengths were, but Meredith explained them on a deeper level.

“Even though I’m 54 years old, StrongPoints reiterated not only what my strengths are, but how to use them and how to apply them,” said Sheila. “It’s one thing to know them and know they are there, but it’s another thing to apply them.”

And she was able to apply them during her field experience. As a social work major, Sheila interned with the Veterans Treatment Court in Harnett County. She credits the social work program for providing her with the tools to be successful in the real world.

“Taking the knowledge that I gained from the social work program, having it in place, and going right into the field, and being able to use it that quickly was such an educational experience,” said Sheila. “You are literally taking what you’ve learned and applying it immediately.”

“I started my bachelor’s degree journey in January of 2016 and I will graduate with my master’s degree in May 2020. In four years, I will have completed two degrees. That is freaking amazing.”

Once she receives her MSW, Sheila will complete 2,000 hours of supervised practice in the field to obtain accreditation as a licensed clinical social worker. She plans to open her own practice and be involved in advocacy work.

“My passion is to work with veterans. That is my goal. That is what has gotten me through those late nights. Being up all night working on a paper or studying, and thinking that I can’t do this, I would tell myself ‘think of the veterans. Think of those people out there like you.’”