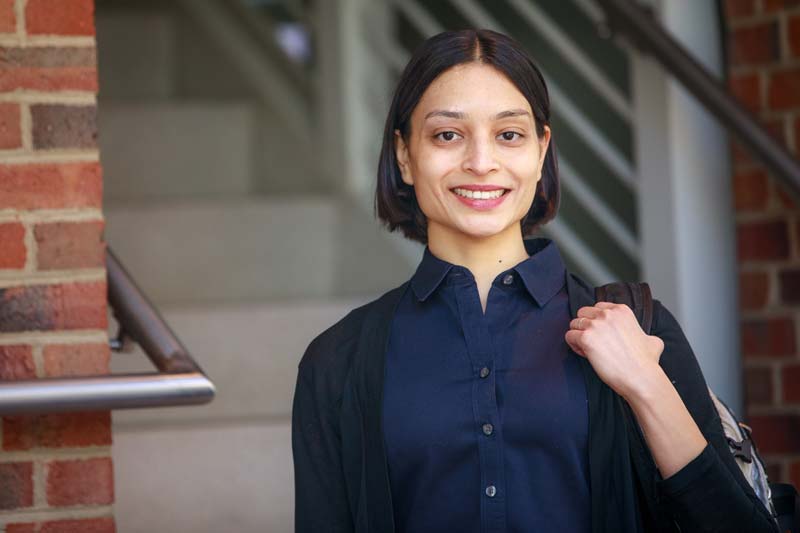 Nina earned her undergraduate degree in marketing and accounting at New York University Stern School of Business and worked in consulting. She also owned a studio where she taught Gyrotonic exercise, a form of mind-body exercise done on machines that increases flexibility and core strength. Currently, she teaches the exercise privately.

“Teaching exercise made me want to study medicine,” Nina said.

Having lived in both New York and Philadelphia, she moved to Raleigh two years ago and says it’s the prettiest place she’s ever lived.

She was drawn to Meredith’s Pre-Health Post-Baccalaureate Certificate Program because it would allow her to take an upper-level biology elective, as well as the semester-long biochemistry course. Nina said that her experiences with the program’s adviser, Andrea Marritt, were a large part of what she enjoyed about the program. With Marritt, Nina conducted physiology research on neural conductance velocity in earthworms.

“Dr. Marritt individualized the program for each student,” Nina said. “She helped me choose my classes based on my background and was my favorite part of the program.”

At Meredith, Nina had the opportunity to sharpen and develop her leadership skills by leading a volunteer project at the Women’s Center of Wake County. Her cohort held a luncheon, multiple self-care sessions, and a large toiletry drive where they gathered hundreds of items.

“The event itself was amazing. It was really touching to work with the women in the shelter, and I think we all got something out of it,” Nina said.

Returning to school posed a challenge for Nina, as it had been years since she had taken classes, and readjusting to college coursework took time. However, Nina said she found she had developed skills in her previous careers, such as auditory listening in meetings and advanced time management, that made her a stronger student. She further prepared herself by looking up specific studying strategies and applying them to her coursework.

Nina found support in the faculty at Meredith, who were not only approachable and encouraging, but more than willing to write recommendations for her and her peers. She had little previous experiences with the sciences before starting at Meredith, and felt that the faculty made the material accessible.

“I and a lot of others in my class were career changers and came in with no idea of what to expect. The professors made the subject matter approachable and easier to get through. They really built my confidence.”

When describing her strengths, Nina said, “I have high expectations of myself. Coming into the program, I really wanted to do well. I didn’t know my potential with the sciences, so I approached everything with the best that I had.”

With plans to begin medical school in fall 2019, Nina will take her Medical College Admission Test (MCAT) this summer.

“At Meredith, I was able to lead again, and learned what I could accomplish in a year, which was a lot. I think the caliber of education I have received at Meredith has been amazing.”

Over 90% of Meredith’s Pre-Health Post-Baccalaureate program graduates are accepted into health professional schools. Learn more about the pre-health program