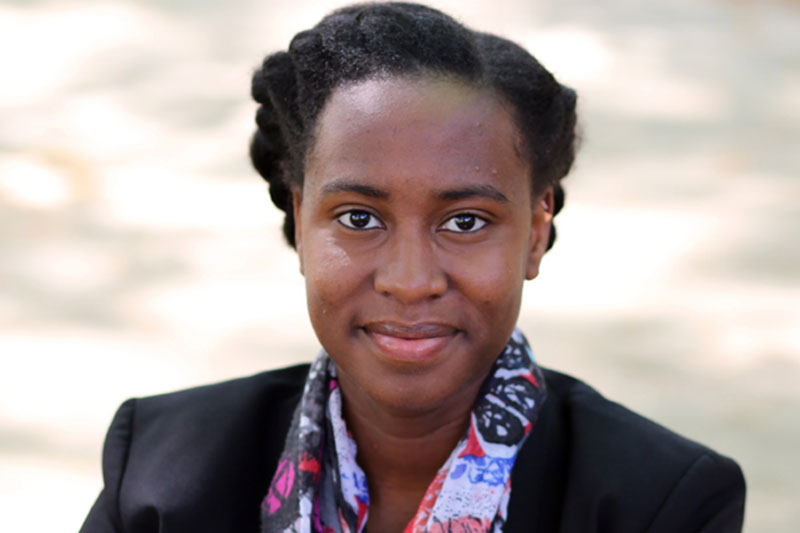 Melyssa Minto, ’17, had her first taste of research before she ever came to Meredith. She knew immediately that she wanted to make it her career. Since then she has worked as a research data analyst, published a statistical software package, and written an honors thesis on the morphology of crayfish. After graduation she’ll continue her pursuit of knowledge through a Ph.D. program in computational biology and bioinformatics at Duke University.

A double major in mathematics and biology, Melyssa will use both her majors in her Ph.D. program, which focuses on using computer algorithms to answer biological questions. She is particularly interested in genetics and epigenetics, a newer field that explores what controls a person’s genes. Though she intends to pursue her passion for research and eventually get a job in the industry, Melyssa said she has a sneaking suspicion that she may also end up teaching.

“I am a tutor now, and my mom and grandma were both teachers,” said Melyssa, who tutors students with learning disabilities in math, chemistry, and biology.

Melyssa said her primary strengths are her desire to always continue learning and building upon her knowledge, and her fierce sense of determination.

“There have been a number of obstacles in my life, but I’ve always known that no matter what, I will accomplish my goal,” said Melyssa. “I’m very resilient – my mom has imprinted that onto me. I will persevere through whatever is happening in my life.”

She has found support to build on her strengths in several places within the Meredith community, including the Honors Program, Black Student Union (BSU), and the International Society for Pharmaceutical Engineers (ISPE).

“I really appreciate the Honors classes,” said Melyssa. “They have a unique type of challenge to them. We have deep conversations in class, and they have helped to expand my knowledge and raise my standard with regard to academic rigor.”

Originally from Jamaica, Melyssa attended J.S. Dobbs Clement Early College High School in Durham, N.C. As an early college student, she felt a bit out of step with some of the other first-year students when she first came to Meredith. She reached out to Assistant Dean of Students Tomecca Sloan, who connected her with BSU, where she found a rich community of friends. She has enjoyed the variety of programs and events that she worked on through BSU, which also allowed her to expand her organizational and planning skills.

“Every year we have a successful Black women’s dinner when we invite professionals from different fields to sit on a panel,” said Melyssa. “Everyone who attends is learning from these successful women, asking questions and getting one-on-one advice.”

She was particularly moved by a “Blackout” event that BSU planned in conjunction with a social work class to protest a police shooting in Charlotte, N.C., in which students wore black and lay on the grass in silence.

“It impacted me in a way I didn’t think it would have. Lying there in total silence looking up at the sky – it made me think about people whose last seconds might be like that.”

When Melyssa was deciding where to attend college, she considered attending a large public university. She chose to come to Meredith instead because she fell in love with the campus and the welcoming community. As she approaches her graduation and reflects on her time here, she’s glad she made the choice she did.

“I could see a future here, and I couldn’t tell where I would end up at a big college. Here you have faculty support; they know your name – that was really important to me. This is definitely a decision I don’t regret.”