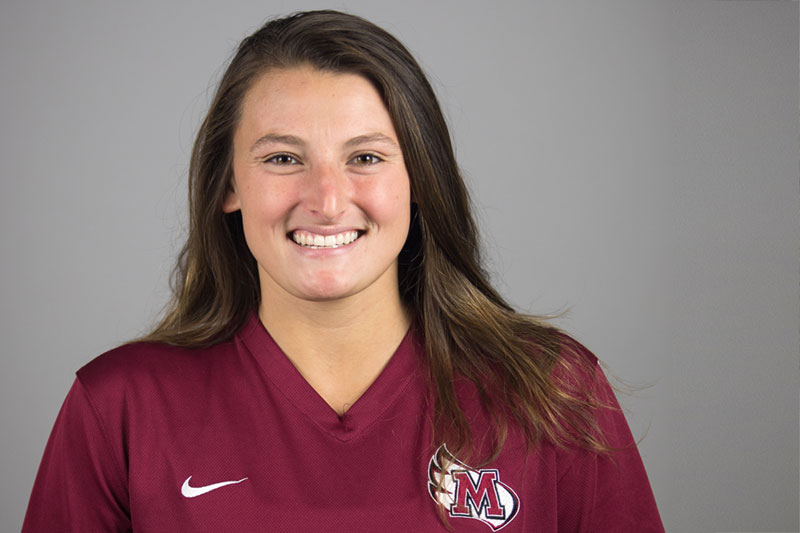 As a two-sport student-athlete, exercise and sports science major Kirstie King, ’19, has learned the importance of a healthy balance on and off the competition fields. Being able to compete in two sports for the Avenging Angels is one of the reasons Kirstie chose to attend Meredith College.

“I believe taking part in collegiate athletics has helped me become more goal-oriented and self-reliant,” said Kirstie. “I am more self-confident and assertive because of the experiences that I have had on the athletic fields.”

A four-year starter on the soccer team, Kirstie has added several athletic accomplishments to her resume. Last season, she was an NCCSIA All-State First Team selection, as well as a USA South All-Conference and All-East First Team honoree. She is also a two-time Most Valuable Defensive Player. In 2016, she was named to the USA South All-East Second Team.

The Fayetteville, N.C., native is also a member of the Meredith basketball team.

When she isn’t competing in athletics, Kirstie finds time to get involved on campus. She has participated in Cornhuskin’ every year and is also a member of the Sports Science Association. As an exercise and sports science major, Kirstie completed an internship with The Strength Feed, a strength and conditioning gym, and is currently working on undergraduate research.

“I never thought that I would do research, but one of my classes touched on something that I thought was really interesting, and I decided to research that topic,” said Kirstie. “My research is to see how a women’s lacrosse athlete’s body composition changes throughout the season as she competes.”

Throughout her time at Meredith, Kirstie has learned that she is a leader who wants to help others succeed either on the soccer field or basketball court and is empowered to apply the word strong in everything that she does.

“Meredith has helped me understand that the little things you do make a big difference down the line, physically and mentally,” said Kirstie.

After graduation, Kirstie plans to attend graduate school for exercise and sports science with the hope of becoming a college professor and a women’s college soccer coach. Her goal is to find something that she is passionate about and make a difference in people’s lives. She wants to be someone that kids can look up to and serve as a mentor to young women.

“I have been at Meredith for three years and they have been three of the most important years of my life,” said Kirstie. “I came here as an immature teenager, primarily interested in sports, and now I will leave a confident woman, sure of myself and ready to meet the challenges that the world throws at me because Meredith has made me strong, intellectually, culturally, and socially.”