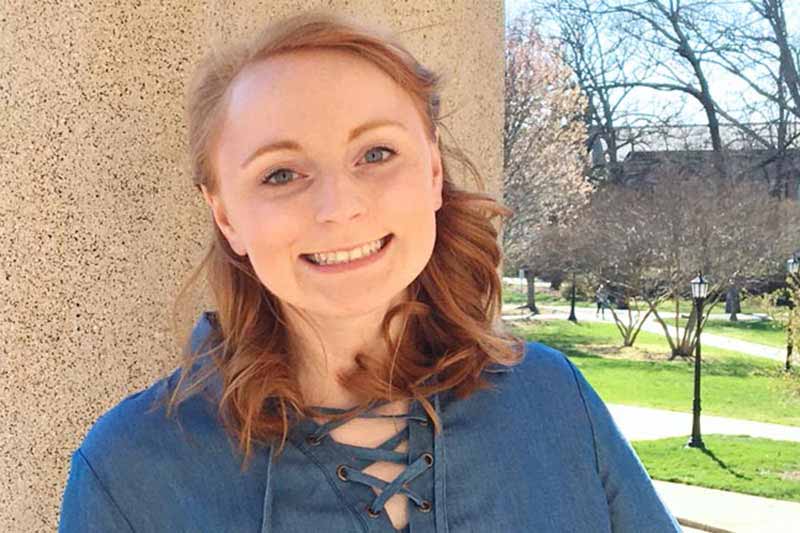 Responsibility is one of Katie Murphy’s major characteristics, and at Meredith College she has come to see how this is a strength.

“To many, responsibility just means that I do what I am expected to and that I follow the rules. Meredith has helped me see that responsibility goes beyond that,” Katie said. “I mean what I say and I say what I mean. People find me reliable because I hold myself accountable.”

Katie has certainly taken on many responsibilities at Meredith. She serves as a resident assistant, a Learning Center tutor, editor of Meredith’s yearbook, and is vice president of White Iris Circle, which is an admissions ambassador program, and treasurer of the Meredith Health Professions Society.

Katie is completing majors in public health and psychology, along with minors in biology, chemistry, and Spanish. She is also an Honors scholar, GSK Scholar, an Impact Raleigh Scholar, and a member of several honors societies.

Studying abroad has been a significant part of her Meredith experience. She spent the summer after her freshman year in Meredith’s program in the United Kingdom, and later spent five weeks in Spain.

The U.K. Program included a biology course she said was an incredible opportunity. “Not only did I get to learn from the dean of the School of Natural and Mathematical Sciences in a country with a rich history of scientific advances, but I also got to learn alongside a student who already had three years of college experience.”

Traveling to London was Katie’s first time leaving the U.S., and the summer program afforded her the chance to travel independently to Ireland and Germany. When she returned to campus, she was offered a student position in the Office of International Programs and later was hired as a teaching assistant in the U.K. Program.

“I am naturally a very curious person, which is part of the reason why I have enjoyed studying abroad and observing other cultures so much,” Katie said. “But Meredith has really allowed me to explore all my interests, from public health and psychology to Spanish.”

Katie has been accepted into the Class of 2022 at the Edward Via College of Osteopathic Medicine. She will be attending the Carolinas Campus in Spartanburg, S.C. “My plan is to become a primary care physician and to participate in global outreach medical opportunities,” Katie said.

She believes the support from Meredith faculty and staff has made a difference in her life.

“The support in and out of the classroom is something I think is unique to Meredith,” Katie said. “Attending Meredith has been empowering — I have found my voice, discovered new passions, and had classmates and faculty who have supported me. I am a stronger, more independent person.”

Learn more about majoring in public health and psychology