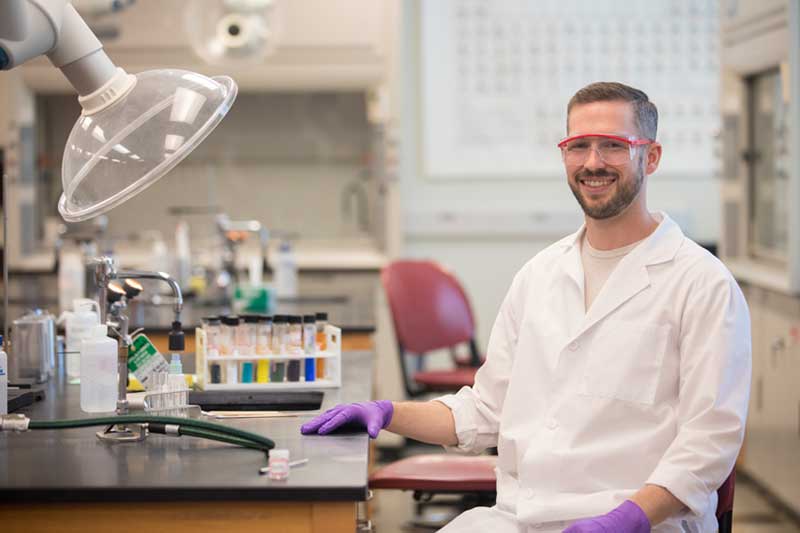 Through Meredith College’s Pre-Health Post-Baccalaureate Certificate Program Hunter Peden came to understand health studies from a new perspective and learned he could achieve more than he thought possible.

Hunter completed his undergraduate degree at UNC-Greensboro where he studied anthropology and French. He went on to complete his master’s degree at Northern Arizona University, where he focused on linguistic anthropology.

“I always knew I wanted to go to medical school. I was interested in languages, but everything I studied contextually focused on medicine. My master’s degree was in communication between doctors and patients,” Hunter said.

Having lived in Apex, N.C., most of his life, Hunter had heard about Meredith and the strong reputation of its pre-health program. He believed Meredith would be a good opportunity for him.

“I appreciated the fact that Meredith is a women’s college because most of the people in my life that have been strong mentors or guiding figures have been women. I was proud to be part of such a strong community.”

Beginning the pre-health program was a challenge for Hunter because he was working with subject matter that was unfamiliar to him. “I don’t have a science background, and my last math class was 15 years ago. The classes here were challenging.”

He also found that while the pre-health program allowed him to understand health studies from a new perspective, approaching the subject from a new angle brought its own difficulties.

“I came in with a social science degree. I understood health studies from a qualitative perspective. I had to do a paradigm shift and learn to understand illness from the ground up and from a biological perspective rather than a sociological perspective,” Hunter said. “It challenged a lot of my perceptions, but also enhanced how I viewed it. I worked harder in a different way than I ever had before, and learned I could do things I’m not familiar with.”

Hunter believes the faculty at Meredith contributed to his success.

“They work with you to help you be the best you can be and encourage you to work hard. All of them are super approachable, and their support when you’re struggling is probably not something you find at other institutions,” Hunter said.

Hunter also had the opportunity to volunteer during the pre-health program. “I was really excited that the program encouraged me to go out into the community and find meaningful volunteer work.”

He ended up choosing to work with Wonder Connection, a program which brings science lessons and activities to children at UNC Children’s Hospital.

“I come from a family of educators, and working with children has always been a part of my life. I really enjoyed working with kids one-on-one. It was fun for the kids, who had usually been in the hospital for several weeks,” Hunter said. “We taught them, but the primary point was for the child to be in control. They made the decisions and we did what they wanted to do. It was a way for them to be in control while in the hospital, and gave them a little bit of empowerment. I don’t think I would have had a chance to do this if I hadn’t come to Meredith.”

Hunter also worked as a teaching assistant in an undergraduate chemistry lab, where he had the opportunity to work with students individually and particularly enjoyed working with one student who was visually impaired. “I got to know the student and became friends with her. She taught me things; I didn’t teach her.”

Though he has finished the program, Hunter is working with the program’s director Andrea Marritt to prepare for medical school. He said that she and the other faculty are very focused on preparing him and his peers for the Medical College Admission Test (MCAT).

“They trained us to think analytically and not just consume information. When going into a field like medicine you can’t just regurgitate information, you have to be able to analyze.”

Hunter intends to take a position with IQVIA, a health information technologies and clinical research company, during his gap year while applying for medical schools.

Over 90% of Meredith’s Pre-Health Post-Baccalaureate program graduates are accepted into health professional schools. Learn more about the pre-health program