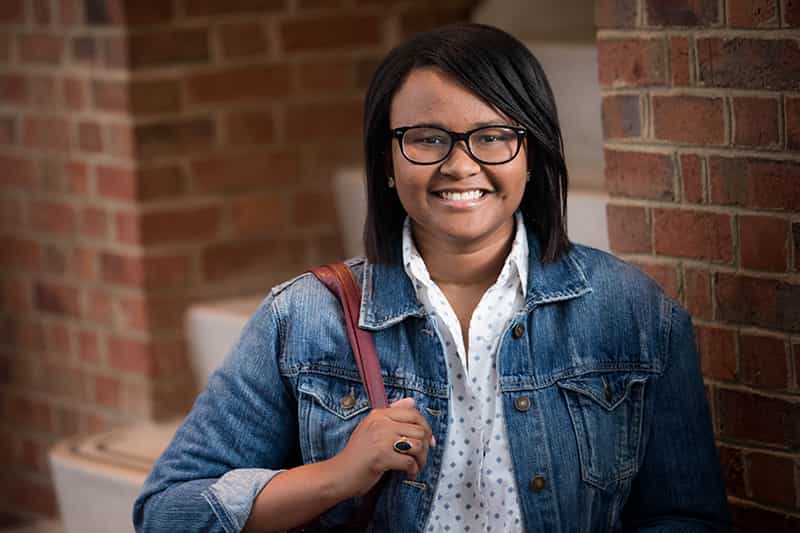 For Erin Murray, ’19, the quest for choosing the right college ended when she caught her first glimpse of Johnson Hall as she drove down Main Campus Drive as a high school senior. Falling instantly in love with the beauty of the campus, this Johnston County “Oddball” became convinced she had found her place at Meredith College.

And find her place, she did. Halfway through her junior year, Erin, double majoring in biology and public health, found herself holding various leadership positions around campus, including resident assistant (RA), Cornhuskin’ co-chair, and of course, Class of 2019 Oddball. The “Oddballs” are a spirit group of four very enthusiastic odd-class students who entertain by doing cheers and other amusing stunts. She also completed undergraduate research and was a member of the student dining team.

Erin’s deep involvement in campus life stemmed from the independence and leadership skills fostered by her family, who is her foundation. Erin, a first-generation college student, was inspired by the strong, independent women in her family and her feminist father.

“They instilled in me: ‘Take control of your destiny – don’t let anybody control your situation, because you are your own person,’” Erin said. “[They] showed me I can be successful no matter what comes my way.”

Living on campus also helped Erin become an active member of the community. She became involved with residence life because she enjoyed helping other students become engaged in the campus community.

“I was drawn to residence life in particular because of the strong customer service aspect of the job,” said Erin. “I’m here 24/7. I am able to conduct meetings in my room or the parlor. I am readily available when people need me.”

Her participation in campus life only enhanced her strong set of skills. Attending student life forums helped Erin develop her voice and recognize the power she has to change policy, while becoming a member of the Oddballs helped Erin discover the power of knowing her audience in order to strengthen her communication.

Among her many roles, Erin credits her position as Cornhuskin co-chair for providing her with the highest number of transferable skills.

As an innately independent spirit, Erin’s greatest challenge as a leader came from learning to work as part of a team.

“I am a very competitive person, but I’ve learned to open up and take suggestions,” Erin said. “We’re all going to take each other to the next level in some way, shape, or form – by sheer strength and encouragement.”

As to what the future holds after graduation, the biology major is keeping her options open, considering lab research, teaching, and even following in her father’s footsteps and enlisting in the military.

“There are jobs emerging in STEM every day that didn’t exist even five years ago. So right now, [the future] is open-ended,” Erin said.

Learn more about the traditions at Meredith College.