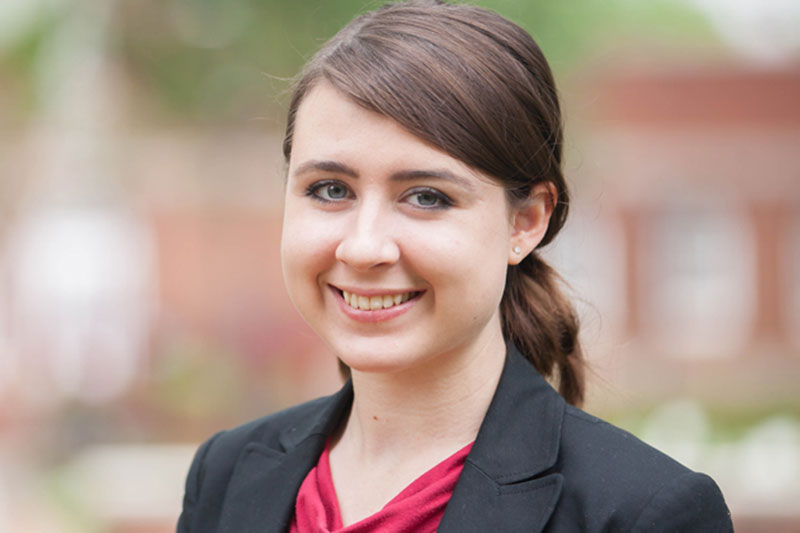 To say that Emily Woolard, ’17, is a gifted student is an understatement. While at Meredith she has conducted undergraduate research within each of her three majors (psychology, biology, and public health); as a first-year student, she co-authored an article that was published in a journal; she studied abroad for five months in Copenhagen, completing a rigorous internship at an MRI research hospital; and she has developed a new protocol at the Environmental Protection Agency (EPA) where she interned and now holds as a position as a student contractor.

What is striking about Emily’s story is that unlike many other strong students, she didn’t know if she would be able to attend college. She spent winter break her senior year of high school filling out scholarship applications.

“In March, April, and May emails and letters started coming in and I realized it was going to work out,” said Emily.

Although attending Meredith was also somewhat serendipitous, it turned out to be the perfect place for her to build on her intellectual gifts. Supported by faculty mentors in each of her majors, she has explored a wide range of career and research options, both to determine exactly what her path should be, but also for the sheer love of learning.

In the latter category, she contracted a Medieval Latin course as part of a research project comparing Medieval and modern approaches to women’s health care. She became interested in the topic when she learned that medical research currently used is based on clinical trials of which 80 percent of subjects are male.

“I’m very feminist so I love this topic. The point I’m trying to make is Medieval health care was really not that different,” she said.

Every new experience has been one more opportunity for Emily to refine her goals and interests. At the EPA, working in a behavioral lab, she realized that she was drawn to a more biological approach to research. She described working on an NSF-funded program in a biophysics lab as a place where she “… learned programming skills, and was exposed to the intersection of biology and physics – it reinforced that I like the molecular levels of organisms.”

She chose to study abroad in Denmark in part because she thought she wanted to be a medical doctor. While conducting MRI research for her internship, Emily also took a health care class taught by doctors. She was given case studies of real patients and then talked to them face to face, learning hands-on aspects of health care such as suturing and inserting intravenous lines. In the end, she realized that her true passion lay outside of the health care field.

“Study abroad gave me the opportunity to put together all of these fields and understand what I wanted to do. I realized I didn’t want to be a medical doctor – it seemed like a lost cause to me. I couldn’t change the world – could hardly change people’s health. It felt like my impact would not be as great as it could be.”

After all of her experiences, Emily now knows she prefers a molecular approach to examining genetic material. She says it feels more fulfilling, that it comes closer to satiating her thirst for knowledge.

“It feels like it’s closer to unlocking the mysteries of our bodies.”

Not all that Emily has learned in college has been intellectual in nature. While in Copenhagen, she thrived on being surrounded by people from different cultures and regions.

“There were people from Japan, Italy, Australia, Portugal – it was so amazing to interact with all of these people and learn about their backgrounds.”

At Meredith, she has made close friends, both with her peers and with her faculty mentors. They’ve stood by her when she struggled to establish her independence and learned to put her college education first. She’s come to value giving back to her community – and the importance of being kind.

“I’ve become a lot nicer, being surrounded by nice people. I didn’t know how to be nice. When I look back I think, ‘Why was I like that?’”

After she graduates, Emily plans to attend graduate school to earn a Ph.D. in molecular and cellular biology – but first she wants to take a year off to earn some money and travel while she continues her efforts at the EPA.

“The relationships I’ve had with my faculty have been so important to me. It’s great to feel wanted – and I got that sense here,” said Emily. “My faculty make me feel like I can do anything.”