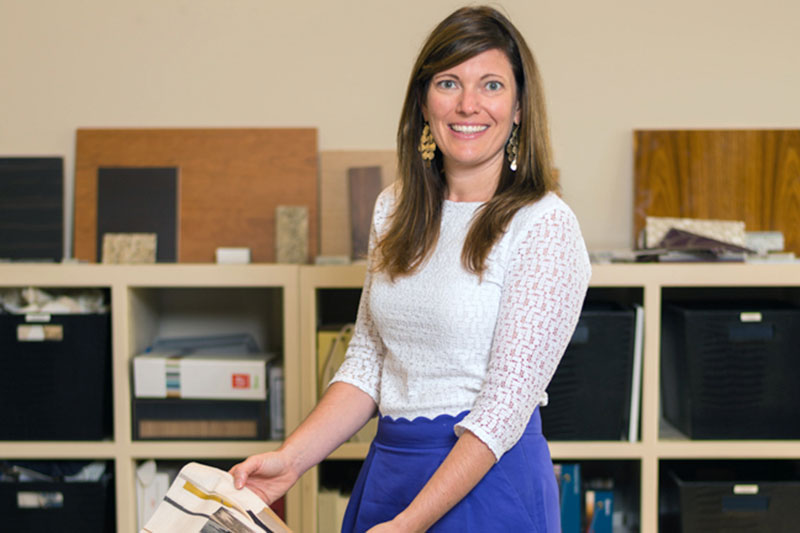 After earning a degree in advertising from UNC-Chapel Hill in 1998 and deciding the field wasn’t for her, Cullen Moser, ’07, wanted to pursue a second degree in interior design.

While researching the offerings of schools near her then-Chapel Hill home, she discovered Meredith’s accredited interior design program.

“That accreditation was a must – not only for getting a quality education from a well-respected college, but because it’s something respected design firms look for in prospective employees,” said Cullen, now an interior designer with Hatteras Yachts. “In addition, the thought of sitting in a classroom of 30 students or less was very appealing!”

Twenty-four when she started the program, Cullen was “extremely worried about being the oldest person in the class, but soon learned that was not at all the case,” she recalled. “There were so many students just like me – in their mid- to upper 20s, going to Meredith for a second degree, working to support themselves – so I felt like I had a real support system.”

As for most other adult learners, that support – from both fellow students and faculty members – was invaluable to Cullen.

“Working and going to school full-time wasn’t easy, but with Meredith’s variety of class times and accommodating professors, it wasn’t as stressful as it could have been,” she said. “It was those kinds of things that got me through my three years and made me appreciate how truly special Meredith is.”

Cullen couldn’t be happier with what she gained by pursuing that second degree.

“My Meredith degree has given me the education and knowledge I need to be successful in my career, as well as the confidence to get to where I am today – something I didn’t necessarily have when I began the program,” she said. “It also has given me a wonderful network of women all over the country who are great mentors and friends.”