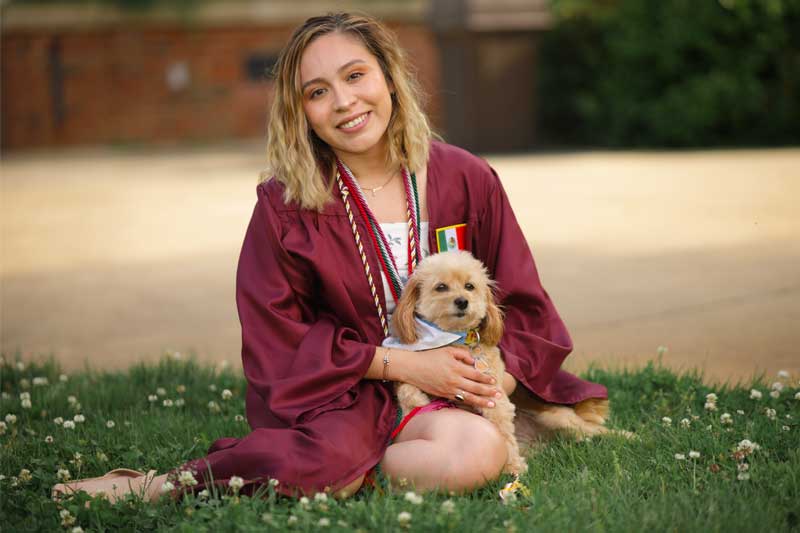 A project Cinthia Arreola, ‘21, started after taking Advanced Spanish Translation Practice while pursuing double majors in biology and Spanish will continue to help prospective students long after her graduation.

Cinthia always had a drive to help others, but this course opened her eyes to ways to support her community through translation. Her Spanish professors frequently encouraged their students to help the Hispanic community outside of school. Inspiration from other Latinas on campus further developed her desire to do greater good; but she wanted deeper involvement than through clubs and organizations. Eventually, those influences led Cinthia to seek the student bilingual web writer position at Meredith, which she began in fall 2019.

Looking through the lens of high school students considering enrollment at Meredith or at what information would be important to non-English speaking parents, Cinthia thoughtfully collaborated with the marketing office, her professors, friends, and a host of campus departments to select materials for translation.

Cinthia’s work supports a broad audience. High school counselors use translated materials to assist with prospective student conversations. Meredith’s admission and financial assistance counselors can point Spanish-speaking families to key translated information during the admissions process. Many current students share that they find the information helpful in guiding conversations with their own parents about important issues that arise for them. In addition, as community awareness of Meredith’s translation efforts has increased, it has drawn accolades from organizations such as El Pueblo and the Mexican Consulate’s office in North Carolina.

“I’m so proud to have worked on this project!” Cinthia shares. She knew this would be “something big” but she did not realize what changes in herself she would experience. She has learned more about herself, her friends, and her community. “One of the biggest challenges for my translations was that I needed to be inclusive of any form of Spanish,” said Cinthia.

Cinthia’s ultimate plan is to attend medical school to become a pediatrician. After graduating from Meredith, she will be working at Duke University Hospital while preparing for the MCAT.

In addition to her service through student involvement and the translation project, Cinthia has participated as a community volunteer at WakeMed, where she has done interpretations with children, and at Urban Ministries Open Door Clinic interpreting for families. These experiences have further emphasized the importance of her translation work at Meredith. Making it easier for others to transition into higher education is one of the driving forces for her involvement as a bilingual web writer.

“This has been a really great experience. The positive feedback makes me feel good about myself.”

During her senior year at Meredith, Cinthia made a strong impression while completing a graduate level course, Spanish in the U.S., at NC State.

“I was actually the first undergraduate Meredith student that my professor had ever taught and she said she was highly impressed with my academics and contribution to the class,” Cinthia said. “It really challenged me intellectually and academically.”