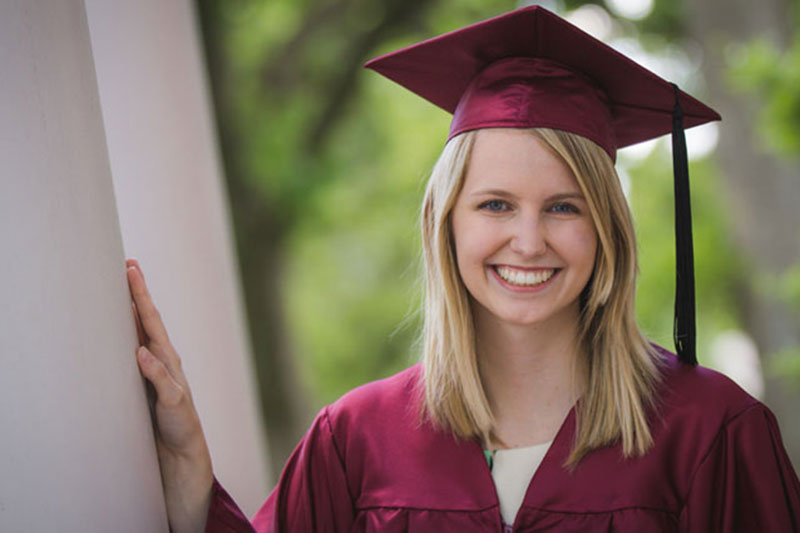 Honors student, undergraduate researcher, athlete, and study abroad advocate are just some of the roles Callie Davis, '15, played during her four years on campus.

Callie, who plans to work in a dental office before applying to dental school, found Meredith to be a community that fosters independence and allowed her to pursue her passions.

While earning degrees in chemistry and history, she created her own physics undergraduate research project for which she made a graphical model of tooth displacement caused by an orthodontic appliance called an arch wire.

She also completed an independent study on the history of dentistry in the 20th century.

“I had the opportunity to combine my passion for dentistry and science with American history, something else that I enjoy,” Callie said. Other accomplishments include an internship at the North Carolina State Archives, and doing her honors thesis on the history of North Carolina's Artificial Limb Program for Confederate Veterans.

“These experiences made me stronger academically, and made me a more independent worker,” she said.

She competed on Meredith's USA South-champion cross country team, serving as a captain during her senior season. “It was a great honor to be a part of this team that made school history by winning the conference championship two years in a row.”

After she studied in the United Kingdom, Callie became a study abroad ambassador and intern in the Meredith Office of International Programs, assisting the office at campus events, and presenting in classes.

“The opportunity to study abroad was life-changing for me, and it is rewarding to help others plan an experience for themselves,” Callie said.

Along with all her academic, athletic, and internship responsibilities, Callie found a way to be an active participant in campus life. She has been a student adviser to freshman in the Honors Programfor three years, helping these students create their own unique Meredith experiences.

“Meredith College empowers women to be strong leaders, take charge, and to set and pursue goals,” said Callie. “I wouldn't have had these opportunities anywhere else.”

Learn more about studying chemistry and history at Meredith.

Learn more about the Honors Program at Meredith.

Sorry, no tags are assigned to this entry.