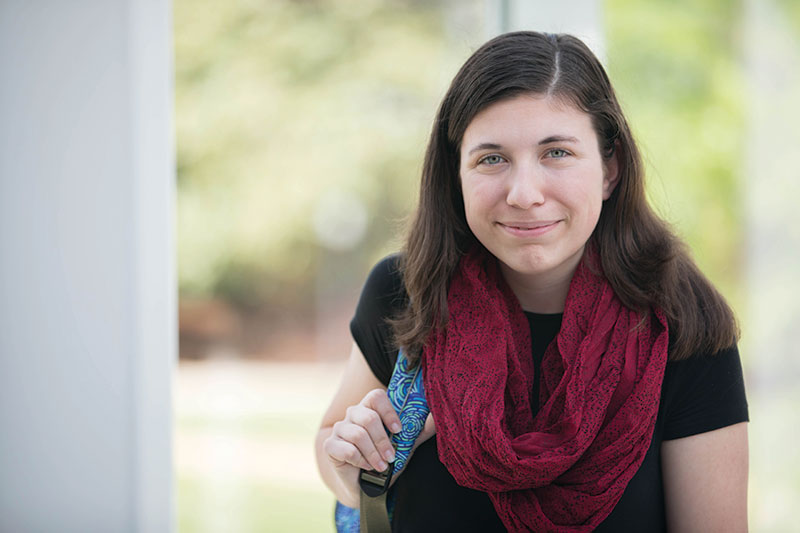 Diagnosed with Multiple Sclerosis (MS) at the age of four, Briana Landis, ’19, has never wanted her disease to define her. Instead, she wants to use her diagnosis to help others. That passion for making a difference has fueled her involvement at Meredith College.

“I will not let my MS or anything else drag me down,” said Briana. “I decided to turn this disease into a positive opportunity. I was not going to let it define who I was, but instead I wanted to use it to inspire me to become a better person, and ultimately, one who inspires others.”

When Briana arrived on Meredith’s campus as a freshman, she was set on being a pediatric physician assistant, but after taking her first research class, she was hooked. One of her favorite things about Meredith is the opportunity to participate in the Undergraduate Research Program. Through that program, she has been able to find her passion for research and has her eyes set on a new career goal.

“After I graduate, I want to pursue a career in medical research, but more specifically Multiple Sclerosis research so that I can help find a cure for MS,” said Briana. “I don’t want any other child or parent, or anyone in general, to ever hear the words ‘You have MS and there is currently no cure’ again.”

Briana conducted undergraduate research on probiotics and the gastrointestinal tract, which helped her during a summer internship, where she worked with Simon Gregory, a world-renowned MS researcher from Duke University. She spent that summer studying probiotics and MS at the David H Murdock Research Institute in Kannapolis, N.C.

“I absolutely love the Undergraduate Research Program,” said Briana. “Being in this program, as well as my many speaking engagements, has given me this opportunity, and being in the program has given me the confidence and skills to be able to participate in such an amazing opportunity.”

Briana is a biology major who has taken advantage of what Meredith has to offer. As the valedictorian of her high school, it only seemed fitting that she would enroll in the Honors Program at Meredith. She is an Honors College Scholar, the Student Government Association Vice President, and serves on the Student Government Association Executive Board. Briana also serves on the Hillsborough Street Executive Board and the Raleigh Intercollegiate Advisory Committee.

Throughout her life, running has always been an outlet for her and a true passion. As an avid runner, Briana knows it is unusual for her to be able to compete in races and enjoy a nice run outdoors. Many people with MS lose the ability to walk, to see, or even their cognitive function.

“Being a runner and staying active have actually helped my MS, decreasing the amount of lesions on my brain,” Briana said. “I also give myself shots every other day to help control my MS and to keep it from progressing.”

The senior from Mooresville, N.C., has been an advocate for MS since she was a child, putting together an MS Walk Team at the age of five, and earning the Kohl’s Kids Who Care Award at the age of seven, which earned her an appearance on The Montel Williams Show. In 15 years, her team has raised $100,000 for the National MS Society to fund MS research in hopes of finding a cure.

“That experience gave me one goal in life: to help find and fund a cure for MS,” said Briana. “Now, almost ten years later, I have that same goal.”

Because of her passion for finding a cure, Briana is actively involved with the National Multiple Sclerosis Society. She has served as the featured speaker at many annual MS Society conferences throughout the year and was awarded the Medal of Valor in Excellence in Leadership. Since being at Meredith, she has also spoken in front of Congress in Washington, D.C., twice and has presented at the Raleigh Chamber of Commerce on behalf of Meredith College.

“Being at Meredith and in Raleigh has given me the opportunity to be near the MS Society headquarters,” said Briana. “It has also given me the tools to not only be a stronger speaker, but also a stronger woman. I love to meet new people and share my story.”

In her spare time, she manages a blog where she talks about living with MS in college and all the great things she has been doing as an advocate for the disease. In preparation for becoming a medical researcher, she plans to earn a master’s and a Ph.D. in molecular biology.

After graduation, she will be studying politics abroad in the United Kingdom with a special personal focus on international politics and disabilities.