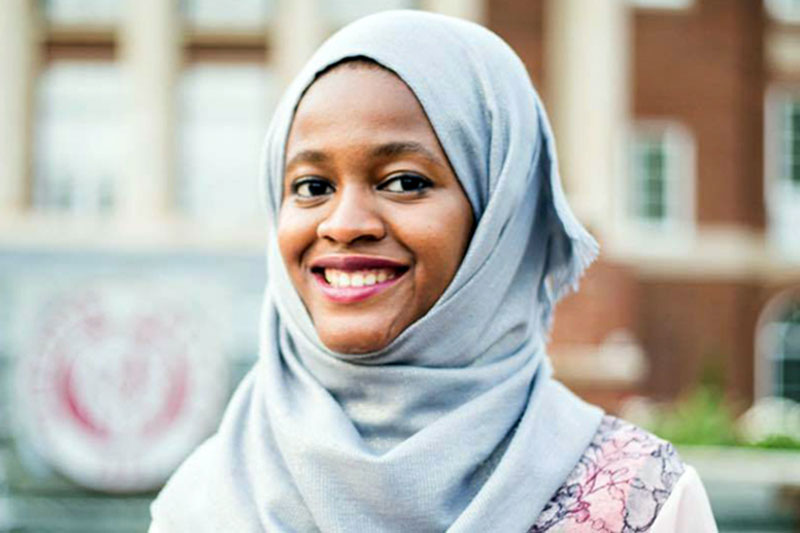 Having lived in five countries and attended four schools, one thing Asha Tuli, ’17, has learned is adaptability. And being an adaptable person has made her a strong Meredith College woman.

Born in Kuwait with stops in the United Arab Emirates, Saudi Arabia, and Tanzania, moving to the United States in 2013 to attend Meredith was one of the biggest challenges Asha has ever had to overcome. She was not only adjusting to college but life in the United States. Life in North Carolina.

Asha was able to face that fear by participating in multiple campus organizations and serving in various leadership roles. She was a board member for the Association of Meredith Commuters and served as vice president of the Meredith International Association.

“Being the vice president of the Meredith International Association was by far the most enriching. I was able to meet many Meredith women who have different backgrounds, which allowed me to learn a lot about their cultures,” said Asha. “Planning and coordinating the annual Meredith fashion show made me realize the differences that exist among my peers and how we can celebrate them in creative ways.”

As a double major in biology and chemistry, Asha had her mind set on being a dentist. She conducted undergraduate research where she explored the barriers that exist to seeking oral health in minority populations of North Carolina and the associations of cooking practices and health in Angola, Senegal, and Liberia. She also volunteered with Wake Smiles Dental Outreach Clinic.

“I triaged patients who took several buses to get to the clinic and I met non-English speaking patients who struggled to articulate their dental problems to the dentists,” said Asha. “My experience at Wake Smiles showed me the positive social impact that dentistry has in improving overall health. During this time, I came to the conclusion that I wanted to serve my community through dentistry.”

The Masaki, Tanzania, native also participated in an internship with the Carolina Population Center at the University of North Carolina, where she conducted population research in the area of public health. She had the opportunity to present her research to the UNC faculty, Ph.D. candidates, and peers. During the Undergraduate Pipeline Research Symposium, she earned second place out of 150 presenters.

“My interest in public health is complemented by my passion for dentistry,” said Asha. “While treating a single patient is extremely important, knowing barriers and possible solutions for entire communities is also crucial.”

With degrees in biology and chemistry, Asha is prepared for her next challenge. For the next four years, she will be attending Virginia Commonwealth University School of Dentistry.

“My degrees are instrumental in my eligibility to attend dental school,” said Asha. “At Meredith College I was exposed to a well-rounded system that enabled me to take courses in fields outside of my major. The information I have accrued over the years has made me a more well-informed person and I am certain that what I learned in my classes will make me successful in the future.”