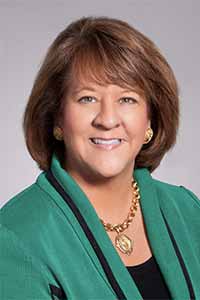 Dr. Jo Allen, ‘80, is the eighth president of Meredith College, a top-tier nationally ranked institution and one of the largest private colleges for women in the U.S. She is the first alumna to lead the 129-year-old institution.

President Allen led a collaborative, community-wide process to develop a comprehensive strategic plan, Meredith Forever. In the seven years of the plan’s implementation, Meredith has exceeded enrollment and retention goals; raised more than $90 million in its largest fundraising campaign ever; earned the highest rating from the U.S. Department of Education for financial stability; enhanced its bond rating from Standard and Poor’s; launched the Going Strong brand; established StrongPoints® (the College’s signature coaching and personal advising program); and completed significant renovations on buildings and infrastructure across campus.

Dr. Allen earned her B.A. from Meredith, her M.A. from East Carolina University, and her Ph.D. from Oklahoma State University. She served as tenured associate professor of English and as administrator at ECU and at NC State University. Before her return to her alma mater, Allen served as senior vice president and provost, and tenured professor of English, at Widener University, where she oversaw academic and student affairs among eight colleges and schools on four campuses in two states.

She has been the featured speaker and has published and presented in hundreds of regional, national, and international scholarly venues.  She has written and edited several books, including one that has won two national awards.

She has been recognized by Meredith College as a Distinguished Alumna and as an Outstanding Woman of ECU.

In service to higher education and her community, Dr. Allen is currently Vice Chair of the Executive Board and serves on the Audit Committee and the Administrative Committee for the National Association of Independent Colleges and Universities (NAICU); a member of the Board of Trustees and a frequent site reviewer for the Southern Association of Colleges and Schools (SACS) Commission on Colleges; as Treasurer of the North Carolina Independent Colleges and Universities (NCICU), a member of the Executive Board of the North Carolina Campus Compact, and a member of the Raleigh Chamber of Commerce Board of Directors. She also serves as a board member of the USA South Athletic Conference and on the Presidents’ Council of the Cooperating Raleigh Colleges.  She is a former Commissioner of the Middle States Commission on Higher Education; served on the Board of the Association of American Colleges of Teacher Education; and was past president of the Association of Teachers of Technical Writing.