Spectacular! An Evening of Laughs, Language, and Celebration 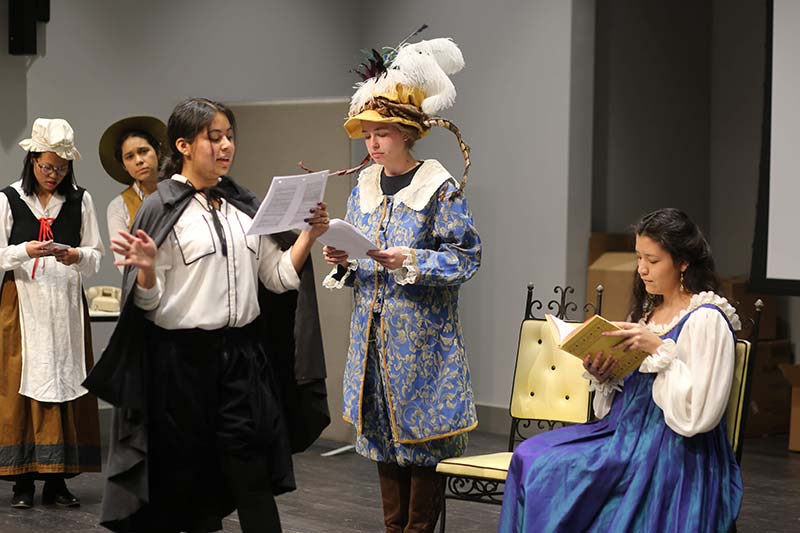 Meredith College’s annual language showcase Spectacular!, sponsored by the Department of Foreign Languages and Literatures (FLL), was held in Kresge Auditorium on March 26. Filled with a variety of live performances, poetry readings, student recognition, and delicious food it was truly a night of celebration.

Spectacular! is a collaboration between the various language departments on campus as well as an opportunity for students and faculty to come together to contribute to the event.

“It is a night of fun and entertainment,” said Jonathan Wade, organizer of the event and associate professor of foreign languages and literatures. “Together we enjoy the full range of emotions packed into these plays and poems, songs, and dances. A community that feels together grows together.”

The evening kicked off with a preview of the Meredith Ensemble Theatre’s production of Boston Marriage which opened on April 3. Other theatrical performances included a scene from Le Médecin malgré lui (The Doctor in Spite of Himself), a play written by Moliére and performed by French 305 students, as well as the short skit Resgurardo personal by Paloma Pedrero performed by Spanish 308 students, and an authentic Sicilian Tarantella (Italian Folk Dance) performed by Lilly Wood, ’20, and Caroline Haw, ’21.

“Seeing the passion from the performers and the heart that they put into what they were doing really drew me in despite the language barrier. After a while you forget about the barrier and get immersed in the moment,” said Emma Hogan, ’19.

Multiple readings of both original student work as well as readings for works from famed foreign authors and speakers were performed by students throughout the event, including an emotional reading from the winner of the Women Warriors Essay Contest Bartola Garcia, ’22, with her work “Women as Bright as the Stars.”

“The senses are activated as people interact with different languages and cultures,” said Wade. “Many have commented over the years how inspiring it is to see other students like them on stage. It is not uncommon, for instance, to see one year’s attendee become another year’s performer.”

Spectacular! has evolved over the years from an event exclusively featuring the Spanish language to embracing more languages such as French, Chinese, and Italian, with new performance styles as the event grows with more students wanting to get involved.

“It’s just a lot of fun to hear and see all the different languages and cultures interacting inside of one space,” said Wood. “It’s definitely an event to attend to gain some worldliness or an international perspective.”