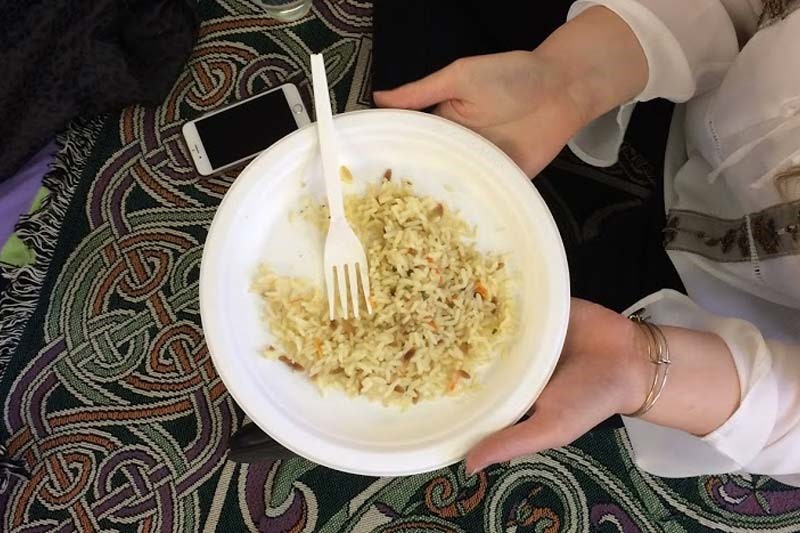 When students and faculty arrived at the event, they received a randomly drawn ticket, designating their seating area and income group for the night. The top 20% of those attending—15 people—sat at a table covered with a linen cloth and set with china and silverware. This group represented people around the world who experience no food insecurity and typically know where their next meal is coming from.

These guests were invited to the buffet first and helped themselves to chicken with mushroom sauce, grilled vegetables, and rice. For them, there was an assortment of cookies for dessert and a choice of either iced tea or water. They could refill their plates as often as they wanted.

The second group represented the 30% of people around the world who live on $2.50 to $10.00 per day. This group sat at tables without linens and ate rice and vegetables on plain cafeteria plates.

About fifty percent of those who attended were given tickets that put them in the group with high food insecurity. These participants sat on blankets on the floor. They had to wait until the other groups got their food to go to the buffet, where their only food option was rice, with water as their only beverage.

Students Yousra Bouzaghar and Ann Cox emceed the event. The keynote speaker was Jill Staton Bullard, co-founder of Interfaith Food Shuttle in Raleigh and executive director of Haiti Reforestation Partnership. Bullard talked about hunger in Wake County, where more than 1-in-3 children experiences food insecurity on a regular basis. She also told the audience about her work with women imprisoned in Rwanda and with families suffering from hunger and malnutrition in Haiti.

The evening concluded with a discussion led by Chaplain Donna Battle, in which faculty and students who had taken part in the feast shared their reactions to what they had experienced. Participants noted how the symbolism of the event related to the human behavior and structural issues that perpetuate, and those that can help to solve, food scarcity issues in the world today. The emcees pointed out that “feeding those who are hungry is important, but ending the systemic oppression that causes food insecurity is vital to ensuring a future where food is a basic right that we can all take for granted.”

Ticket sales and food donations collected at the event were donated to the Kentwood Afterschool Program, which is sponsored by Community in Schools of Wake County.