Politics Aside: Women and the Vote 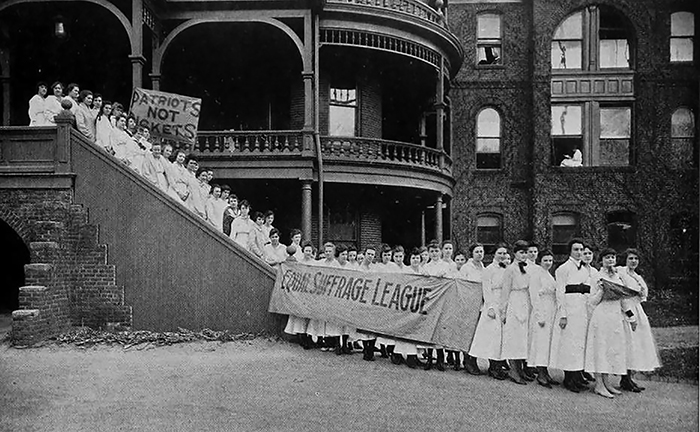 American women won the right to vote in 1920, but they were far from apolitical prior to ratification of the 19th amendment. Revolutionary era women boycotted British goods, women abolitionists sent hundreds of petitions to their Congressmen, and women in states like North Carolina were instrumental in rallying voters behind the cause of prohibition.

Women were not explicitly denied the right to vote in most states until after the American Revolution. Voting had been restricted to property owners. Generally, women could not vote because they gave up their legal right to own property when they married. However, some women still acquired property and qualified to vote. In the early 19th century, states dropped property qualifications and revised their constitutions to allow all free white males to vote, without regard to property. This language simultaneously disqualified both women and free black men who had voted in the past, and reinforced the idea that women had no place in politics.

At Seneca Falls in 1848, activists proclaimed that women had suffered under the tyranny of men too long. Protecting women’s property and earnings were very important, as was suffrage. Some who championed women’s equality still believed suffrage was too controversial an issue, and it was almost struck from the Declaration of Sentiments.

When Congress passed the 14th amendment to protect the citizenship and voting rights of former slaves, some suffragists refused their support because it did not recognize the voting rights of women. Susan B. Anthony and other women voted during the 1876 presidential election in protest and were arrested.

Addressing the Progressive Party’s National Convention in 1912, Jane Addams told the audience that the world would be a better place if women had the right to vote because “women’s issues” – things like education, health and sanitation, the well-being of children, Prohibition, and peace movements – were things to which male officeholders did not devote enough resources. Based on the belief that women’s specialized skills and knowledge uniquely qualified them for certain positions, some states had already granted women the right to vote in local elections, and voters had placed women on school boards.

Many conservative Americans, and particularly Southerners, opposed woman suffrage to the end. North Carolina’s senators voted against the amendment. The state’s largest women’s organization was not comfortable officially supporting suffrage until 1918. Students at Meredith College were more likely than their mothers and grandmothers to be suffragists, as witnessed by the healthy membership of the campus Equal Suffrage League.

Today, Americans still think in terms of “women’s issues.” As women win more elections, we will better understand exactly what the issues and priorities of women are in our modern world.

— Written by Angela Robbins, Ph.D., for Meredith Magazine. Robbins is an assistant professor of history at Meredith College. Her primary area of expertise and research interest is U.S. women’s history. She has developed and taught courses centered on women’s labor history, activism and reform, and a survey of women’s history, both pre- and post-Civil War.