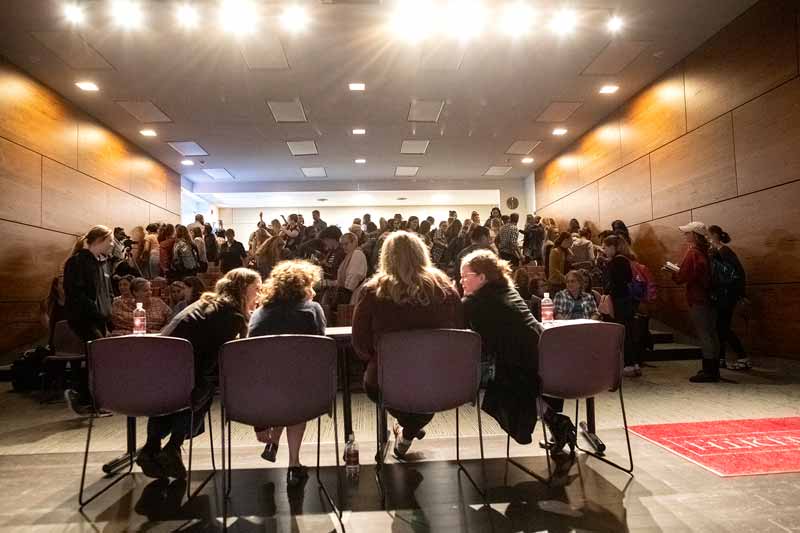 All Creatures Great and Small, the current exhibition at Meredith’s Weems Gallery, features five artists who are dedicated to animals and activism. Their approaches, which include fine art, journalism, video installation, and commercial work, differ but each explores the lives, traumas, triumphs, and the individuality and importance of some of the many nonhumans with whom people share the planet.

Four of the artists featured in the exhibition participated in an Activism: Animals and Art panel discussion on October 24.

Meredith Professor of Art Shannon Johnstone, Lee Deigaard, Jo-Anne McArthur, and Traer Scott discussed their work, including what led them to focus on animals in their art.

“Every photographer is looking for their story … I realized there was a group of invisible animals who are not wildlife and not pets on industrialized farm complexes and on fur farms, who had no voice. Their lives needed to be seen,” said McArthur, an award-winning photojournalist who has documented humans’ complex relationship with animals through her long-term body of work, We Animals.

Other artists on the panel were inspired by their own interactions with animals.

Johnstone said she hadn’t considered animals as subjects until she adopted a dog. Her recent projects, Landfill Dogs and Stardust and Ashes, bring attention to animal overpopulation, with emphasis on dogs from the Wake County Animal Center.

Deigaard said her work, which explores the emotional and physical landscapes where humans and animals cohabitate, is driven by a desire for others to see animals as individuals.

Scott specializes in animal photography, the human/animal bond, and conservation-themed fine art photography. She is the author of ten books, including Shelter Dogs. Scott said her work combines two passions – art and the need to share the reality of what happens in animal shelters to healthy, adoptable dogs.

Another topic for the artists was how they believe art can create change.

“Art shapes the way we think and feel,” Johnstone said. “It has the ability to create empathy for humans and for non-humans.”

Scott said art has an impact “because it crosses language and cultural barriers.”

Deigaard talked about the power of art to shift someone’s thinking. “Art allows a one-to-one encounter, which leads to multispecies empathy,” she said.

McArthur emphasized the importance of combining art with policy making. “The more collaborative [the projects] become, the happier I am,” she said. “I find catharsis in action.”

The panel discussion was moderated by Keri Cronin, a historian of visual culture who is an associate dean at Brock University. Cronin is the author of Art for Animals, which explores some of the ways in which visual culture and animal rights intersected in the late 19th and early 20th centuries.

In the panel discussion, each artist built on the comments made by the other participants. This interaction is evident in the exhibition itself.

“I love the conversation that happens between our work in this exhibition,” Johnstone said.

All Creatures Great and Small continues in Weems Gallery through November 10, 2019. Gallery hours are weekdays 9 a.m.-5 p.m. and weekends 2-5 p.m.