Charis Hill, ’09, doesn’t let obstacles stop her for long. So when Hill was diagnosed with Ankylosing Spondylitis (AS) in March 2013, she soon devoted herself to bringing attention to this rare form of arthritis.

Hill experienced symptoms for 13 years before she was diagnosed, and though she struggled with the news, she is now taking action.

“I feel certain that I have the power to influence more research to find a cure, and that begins with creating awareness,” said Hill.

“More people have AS than have Multiple Sclerosis, yet most people have never heard of AS. Arthritis is the leading cause of disability in the U.S.,” Hill said. “I am extremely vocal and relate everything I do to my diagnosis.”

Hill calls herself a “realistic idealist” who has found a unique way to bring attention to AS – modeling to raise awareness. 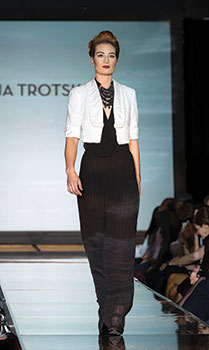 “When I model, I open up the conversation … to put a face on a disease that so often forces people into a sedentary lifestyle,” Hill explained.

Hill’s first modeling experience was in 2013 as part of a benefit show. She then auditioned for the 2014 Sacramento Fashion Week, and was chosen by two designers.

“It feels powerful that I can show people what I can still do even with a debilitating and extremely painful disease,” Hill said. “I’m using it as a platform to create awareness of AS and other chronic diseases.”

Though fatigue is a common symptom of AS, Hill has a very active lifestyle. She works for Sacramento Area Bicycle Advocates, a nonprofit dedicated to promoting bicycling as a way to make the Sacramento region a healthier place, and for the Sacramento Area Council of Governments, planning the region’s annual bike month.

Hill raised more than $5,000 for the Arthritis Foundation in 2013. She was named the adult honoree for the Sacramento affiliate of the Arthritis Foundation’s winter fundraiser, and was selected to attend the 2014 National Arthritis Summit in Washington, D.C. The event gathers 300 advocates from around the country to meet with Congressional representatives to garner support for arthritis.

Hill remains inspired by her experiences as a Meredith student.

“What makes a Meredith student strong is that she is trusted with the responsibility of knowledge, and that’s a very powerful thing.”

This article originally appeared in the Summer 2014 issue of Meredith Magazine.