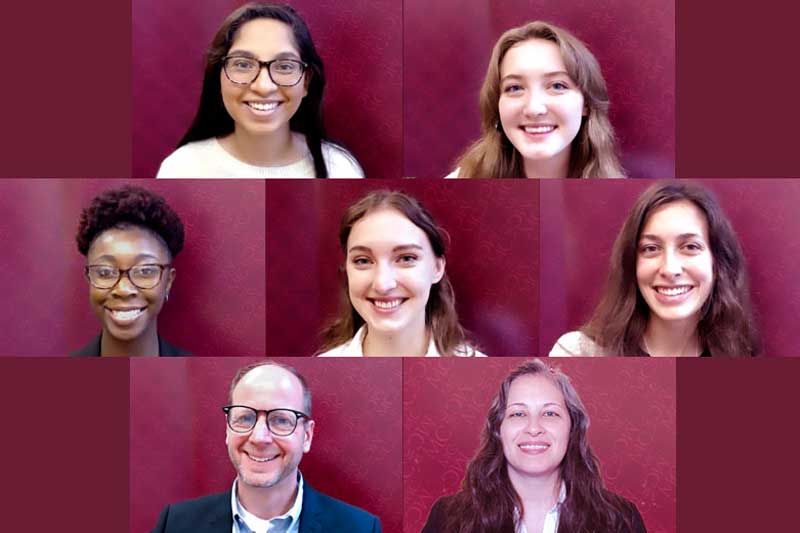 In their first time competing in the APPE Mid Atlantic Regional Ethics Bowl, Meredith College won second place, qualifying them to compete at the national level in February 2021.

Hosted by the University of North Georgia, the event was a two-day, multi-institutional collegiate competition held in partnership with the Association for Practical and Professional Ethics (APPE).

Teams prepared arguments for 15 regional cases ranging in topics from affirmative action to COVID-19 resuscitation procedures. A total of 18 teams from 14 campuses across the region participated in the competition, which included four rounds, a semi-final round, and a final round – all held via Zoom.

Given how much this sort of competition relies on non-verbal cues, the team’s ability to overcome the challenge of debating via videoconferencing was impressive.

“Since we’ve only done in-person in the past, we’re used to being able to huddle and discuss during the competition,” said Elena Blackwelder, ’23. “So we had to adjust the way we work as a team.”

Meredith’s team coordinator and Professor of Religious and Ethical Studies Steven Benko said that part of what makes Ethics Bowl special is the camaraderie that the students have and the trust they have to place in one another. “Trust to do the research, trust to be paying attention, and trust that they are going to say their part of the argument correctly,” he said.

“When we’re together in person, it’s easier to hold each other accountable – but this team found a way to make that work even when they were remote.”

Not only is Benko proud of the team’s success in the virtual format, he’s also proud of their ambition, teamwork, and their dedication to representing the College well.

“They are never satisfied with merely showing up,” said Benko. “They want to be critiqued and they want to know what they need to do to improve.”

Assistant Professor of Management Lisa Delise also served as a coordinator for the team, playing an integral role in their second place win. “While I work on the theory and general team structure, her expertise in organizational psychology and public speaking acumen is key to our success,” said Benko. “She helps critique the team and works with them to structure their arguments.”

Given Meredith’s strong reputation gained through previous competition in the NCICU Ethics Bowl, the team was determined to continue that legacy and represent women’s colleges well at a different competition.

“With this being our first time in this particular competition, we had no idea what to expect,” said Rachel Blay, ’21. “We definitely had to do more research and adjust our approach.”

Having never debated with larger universities such as Clemson University and the University of North Carolina at Chapel Hill, their second place win is a significant achievement.

“At the start of it, the organizers of the bowl didn’t even know who Meredith College was,” said Benko. “Now, everyone knows who we are. This team put our school on the regional and national map.”

Meredith’s Ethics Bowl team members are Raynor Dail, ’22, Elena Blackwelder, ’23, Scout Burch, ’23, Safa Ahmed, ’23, and Rachel Blay, ’21. This is one of the younger teams Benko has worked with, making their win even more impressive.

Burch said she is most proud of the teamwork and the number of hours they put into preparing for the competition.

Ahmed agreed that the team, not knowing how high the level of competition would be, wanted to be prepared. “We practiced up to 12 hours a week every week for months leading up to the actual competition,” she said. “And now that Meredith College is on the radar of every school in the region, we have high hopes for next year.”

The team will begin preparing for the national competition in mid-December, dividing up the research on 17 different topics. Students consider many different angles in preparing their arguments, which Dail finds to be the most exciting part of Ethics Bowl.

“Because we have to look at each case from different perspectives, we are able to push ourselves out of our comfort zones and discuss views that we wouldn’t have previously considered,” she said.

In January, the team will begin meeting to review the research and start working on their arguments with the help and support of experts from the Meredith community.

“One of the things that makes our team special is that we get a lot of help and support from others,” said Benko. “We always bring in professors, alums, and members of the community who are experts in the topics.”

For this past competition, the team leveraged the expertise of Hope Robertson, ’12, who serves as the assistant district attorney for Mecklenburg County. Meredith Provost Matthew Poslusny also frequently offers his time to help with research or to be a guest judge.

“Other colleges do not get the same administrative support that we do,” said Benko. “It’s something that we talk to the team about often, how unique their support is.”