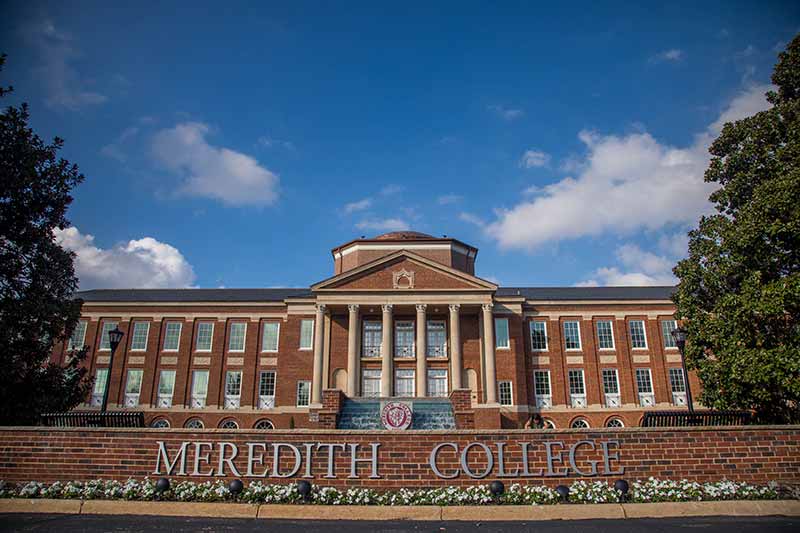 With the U.S. Census Bureau projecting the country’s Hispanic population to reach 106 million by 2050, and North Carolina being one of the top 10 states seeing growth, the number of Hispanic students seeking a college education in N.C. is expected to continue growing.

Starting this month, Meredith’s website is now more accessible to Hispanic students and their families, as a result of a partnership between the College’s enrollment offices and the foreign language and marketing departments.

The translated pages are just one example of Meredith’s outreach. Over the last six years, the Provost’s office has coordinated a number of efforts designed to make Meredith more accessible to Hispanic students – many of whom are first-generation college students – and their families. These efforts have included expanding Meredith’s partnership with the Golden Door Scholars program and strengthening Meredith’s relationship with the Office of the Consul General of Mexico.

Students in Debora Maldonado-DeOliveira’s fall Spanish 385 class did most of the translation work featured so far on the Meredith website. Michelle Castillo, ’21, student assistant for the vice president for college programs, also translated a few pages, with review by Kevin Hunt, associate professor of foreign languages and literatures.

Meredith’s efforts are part of a trend among colleges and universities to provide content in Spanish on their websites to help Spanish-speaking families better understand the admissions and financial aid process. Many schools are using machine-translation tools, such as Google Translate, as the primary means for providing Spanish language content on their web pages.

Meredith considered this option, but ultimately chose not to go this route for several reasons, according to Provost Matthew Poslusny.

“We saw an opportunity to involve our foreign language faculty and provide a real-world learning experience for Spanish majors,” Poslusny said. “We knew, in the end, that the translations our students and faculty worked on would be more accurate, and better demonstrate our commitment to helping Hispanic families understand information that’s complex even for those for whom English is their first language.”

“We wanted to support the College’s efforts to provide accurate information to this important population. We’ve also been looking for a way to showcase online some of the work that our foreign language students have done,” she said. “This project is giving us the opportunity to do both.”

Through funding made available by the Provost’s office, bilingual students are working this spring with Marketing and Enrollment to create additional Spanish-language content for the website.

“One of the things we learned from our students is that we need to do more than translate existing web pages,” Eaves-McLennan said. “We also need to create some new content in Spanish that more specifically addresses the unique needs and concerns of the Hispanic community.”