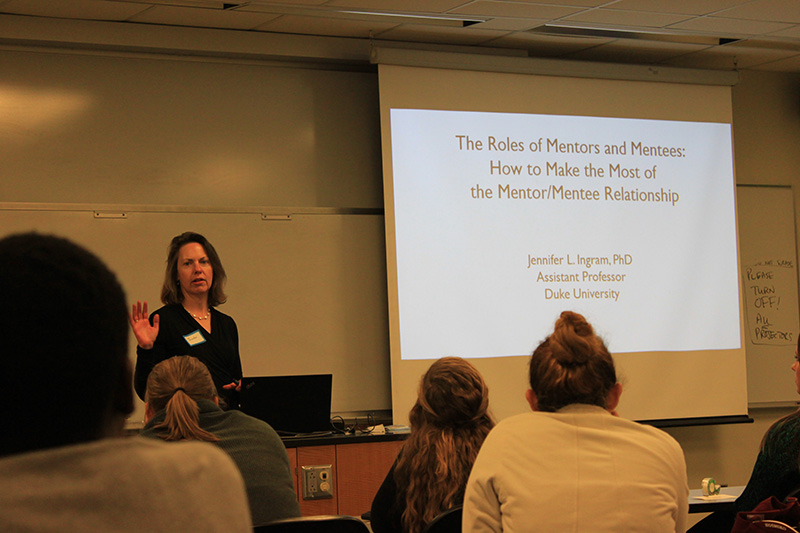 Meredith College science majors were given the opportunity to meet with science professionals through Graduate Women in Science (GWIS) on Wednesday, January 24, as part of a mentoring kickoff event sponsored by the Meredith College Beta Beta Beta Biological Honors Society (TriBeta). This event was the first of several events on which Meredith and GWIS will collaborate for the spring semester.

The College and GWIS are partnering to encourage networking and confidence in women seeking careers in science.

GWIS is a national society with a Triangle chapter where young professionals can network and find career support from like-minded women. At the kickoff event, GWIS representatives introduced a mentorship pilot program, where Meredith students will get to know GWIS members and develop mentor-mentee relationships.

Among the students in attendance was Meredith senior Anderson Woodson. Woodson is a biology and public health major and is also president of TriBeta. “The biggest goal was building that relationship between GWIS and Meredith so that lots of students can get their own mentors,” Woodson said.

According to Woodson and GWIS’s Research Triangle Chapter Vice President Emily Woolard, ’17, the kickoff event was a success and students left having met several potential mentors. “We had a great turnout, so it’s looking really positive moving forward,” said Woolard.

For students who didn’t attend the kickoff and want to become involved, it’s not too late. GWIS will be returning to Meredith’s on February 28 at 6:30 p.m. to present a workshop on imposter syndrome. Tamara Tal, a principal investigator at the United States Environmental Protection Agency, will be the featured guest.

According to Merriam-Webster, imposter syndrome is “a false and sometimes crippling belief that one's successes are the product of luck or fraud rather than skill.”

“Imposter syndrome is very prevalent among women in male-dominated fields,” said Woolard. “[This event] will help students understand their abilities and overcome this problem, and it will be another opportunity to network and offer mentoring advice.”

GWIS will also be collaborating with the College and Women in Biology (WIB) in April to co-host a science exposition for middle school girls. Meredith students will host science activities and hold a mini-networking event with the girls.

Kimberly Worley, ’18, a biology major and public health minor, was at the kickoff event and looks forward to the April event with GWIS in particular. “We get to help them realize women can be in science. I’m really excited about that,” said Worley. “We need women to be inspired to do jobs that have typically been men’s jobs before.”

For more information on GWIS and their upcoming events, contact Assistant Professor of Biological Sciences Maria Pickering-Villa at mpickering@meredith.edu, or visit www.gwisresearchtriangle.org.