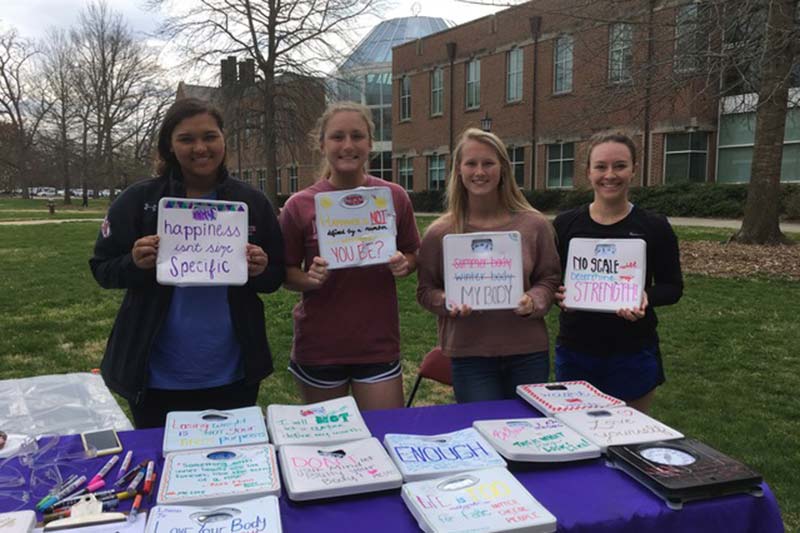 Members of the Meredith College community gathered outside of the Cate Student Center on Monday, March 25, to challenge body and weight stigmas by smashing scales. Bats, safety goggles, and an array of scales were available. Each scale was decorated with body positive and encouraging statements for people to shatter, bash, or crash. Meredith has hosted this event for the past three years. 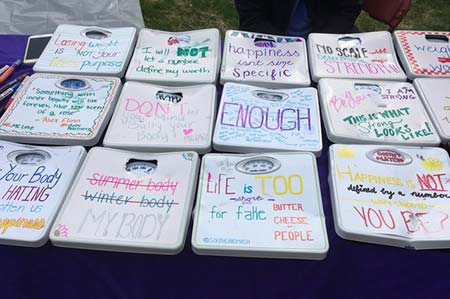 Organizations that were present included the Meredith Counseling Center, Carolina House, an eating disorder treatment center, and Meredith’s StrongPoints. Students, faculty, and staff learned about loving themselves and their body despite what society demands.

“We go to college campuses all across the southeast, we bring scales, and we smash them to smash weight stigma and raise eating disorder awareness,” said Elizabeth Friedman, ’16, the Southern Smash program coordinator.

Kati Thompson, ’21, appreciated the female empowerment message that went behind this event. “It doesn’t matter how much you weigh, what you weigh, or what your number is,” she said. “It should matter who you are as a person. A scale does not define you.”

Friedman described the change that can happen at these events. “This is where the change happens, because people start getting information that’s different from what they get from social media and pop culture,” she said. “This challenges diet culture and weight stigma. This gets people having a conversation and to think outside of what they’d been told since they were born.”

That evening, a Smash Talk panel was held in Ledford Hall. The event encouraged discussion on eating disorders and body image, and was led by an expert from Carolina House.

“It’s a good thing for women to not judge themselves by any number because no one should have to be rated,” said Alli Kester, ’21, on the importance of breaking body stereotypes.

The event was also covered by CBS 17 News