Meredith College to Celebrate A Month in Blume 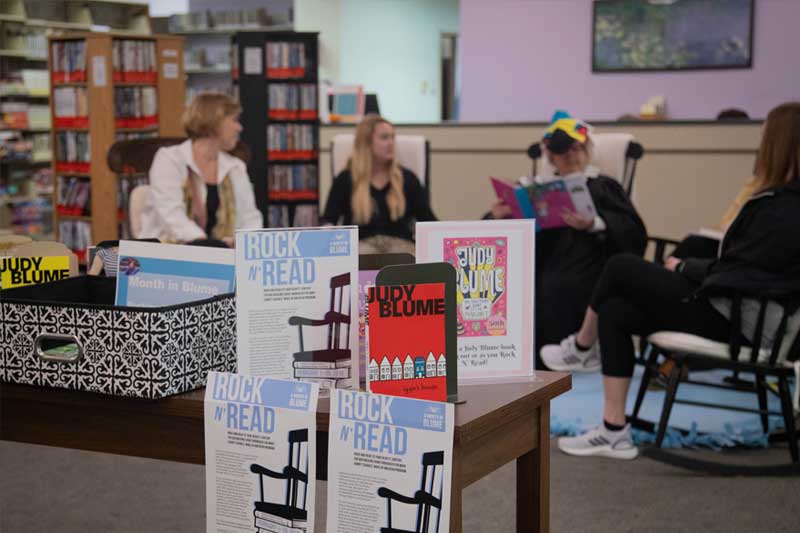 February 2020 is “A Month in Blume,” thanks to a series of events celebrating author Judy Blume.

Professor of English Kelly Roberts, who teaches Meredith’s Young Adult Literature course, has organized this celebration with the support of a steering committee of students and alumnae.

Blume is the author of more than 30 books, including many children’s and young adult classics. Meredith’s celebration is centered on the 50th anniversary of the publication of Blume’s Are You There God, It’s Me Margaret.

Events include a Rock N Read fundraiser each day in February from 1 p.m. – 2 p.m. in Carlyle Campbell Library. Participants are invited to read for the hour in rocking chairs and are encouraged to leave a new or gently used book or monetary donations to contribute to the Wake Up and Read Book Drive for Wake County schools. The drive had an official opening on Wednesday, Feb. 5, featuring a special guest reader (shown in photo above). This event, including other guest readers throughout the month, will continue through February 29. Students in the Young Adult Literature class will serve as hosts for the fundraiser.

An interactive art installation called the Typewriter Project will be in first floor Cate Center from February 10-14.  This installation, inspired by the nationally-renowned Typewriter Project, utilizes an old-fashioned typewriter where participants can anonymously post their responses to one of three writing prompts focused on children’s and young adult literature. At the end of the installation, students will digitize the work products and post on the “Month in Blume” website.

On Wednesday, Feb. 12, an armchair discussion “Are You There God? It’s Fifty Years Later,” will be held at 10 a.m. in Jones Chapel.  The discussion, moderated by Meredith Chaplain Donna Battle, will explore the intersection of religion and literature, with a focus on the Judy Blume book that started it all. February 12 is Blume’s 82nd birthday, so the event will conclude with a reception in the Common Room, with birthday cake and an opportunity to sign a banner that will be sent to the author. This panel discussion counts as an academic or cultural event for Meredith students.

A Young Adult Literature panel discussion will be held on Thursday, Feb. 13 at 2 p.m. in Kresge Auditorium. This will be a conversational discussion featuring Meredith alumnae who are authors of YA or children’s books. This session also counts as an academic or cultural event for Meredith students.

Learn more about Judy Blume and "A Month in Blume." For more information, contact Professor of English Kelly Roberts at robertsk@meredith.edu.