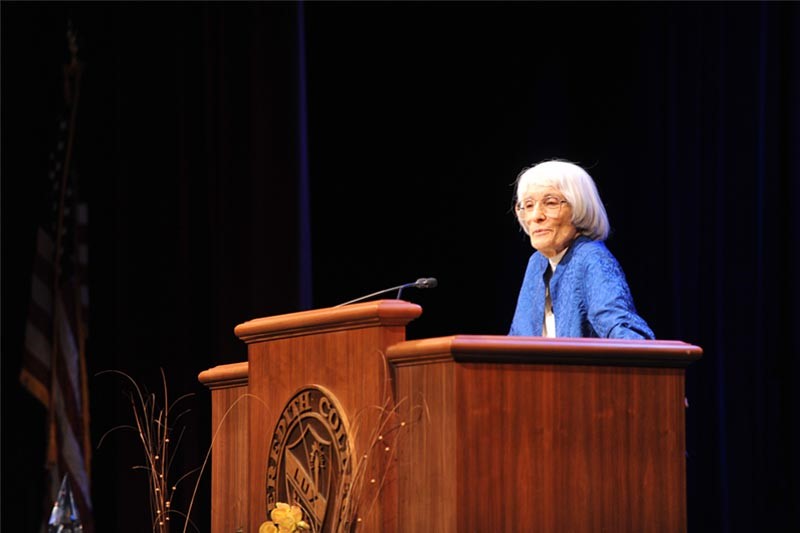 Bernice Sandler, a women’s equality advocate known as the “godmother” of Title IX, passed away on January 5, 2019, at age 90. Sandler was the recipient of Meredith College’s 2013 Woman of Achievement Award, which is presented to an individual who has made a profound and positive impact on the world.

Sandler visited campus on February 20, 2013, to deliver the Woman of Achievement Lecture, in commemoration of Meredith’s Founders’ Day. In her speech, “The Untold Story of Title IX: How we got it when no one was looking,” Sandler described the situation for women and girls before the law was passed. Girls could not take certain courses, and some majors were closed to women. Women scholars applying to college academic departments were often told the “department had already hired a woman.”

When it was passed in 1972, Sandler said many were “not watching to see what impact the bill would have” and the result was far-reaching change. Although often known as the “athletic law,” Title IX applies to almost all areas of education, from kindergarten through graduate school.

“The word ‘sports’ doesn’t appear anywhere in the bill … Title IX covers everything unless an issue is specifically exempted,” Sandler said.

Sandler said the accomplishments of Title IX include “increased awareness of sex discrimination … it ended many overt policies that discriminated against women.”

Sandler served as a senior scholar at the Women’s Research and Education Institute in Washington, D.C., where she consulted with institutions and others about achieving equity for women. She was the seventh recipient of the Meredith College Woman of Achievement Award, which was first presented in 2007.