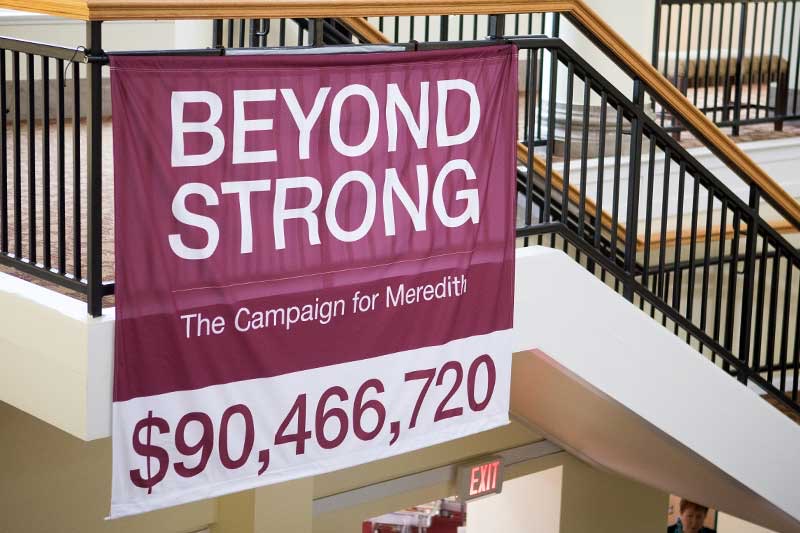 The Campaign has created incredible opportunities for students and the entire campus community at one of the largest women’s colleges in the southeast. The total raised was $90,466,720.

When the Beyond Strong Campaign went public on February 27, 2016, the College had already raised $52 million, surpassing the last campaign grand total by $11 million.

“The pace of this Campaign, the enthusiasm for Meredith, the clear desire to get behind a successful college that makes an impact on students and our community all came together very nicely,” said President Jo Allen, ʼ80. “I’m thrilled that we exceeded our goal because it demonstrates that we can do more than we ever thought we could.  That is the essence of going strong--and being stronger.”

Meredith alumnae, faculty and staff, parents, students, and friends came together during this Campaign and showed that the value of a Meredith education and their experiences with the College are life changing. The College received 32 gifts at the million-dollar level or greater with another 327 major gifts of $25,000 or more. The endowment also grew from $67 million to $116 million at the highest point.

The Beyond Strong Campaign was built on the six pillars of the College’s strategic plan: educational excellence, enhanced enrollment, financial strength, facilities and technology, marketing and visibility, and quality of life.  These pillars guide the planning and resource allocations of the College.

“I have been through four major campaigns in my career, and this is by far the most successful one I’ve ever been associated with,” said Lennie Barton, vice president for institutional advancement. “The support we have received from alumnae, students, parents, and our own faculty and staff is immeasurable. They understand how important it is to give back to a place that means a great deal to them so we can continue the important work of changing lives today and in the future.”

Donors gave nearly $36 million for scholarship support including 92 new scholarship endowments and funds. Students also now benefit from StrongPoints®, a comprehensive advising and personal coaching model found only Meredith, thanks to the generosity of a major gift. Gifts totaling more than $4 million support enhanced study abroad experiences and more than $5 million was raised for STEM scholarships.

The Campaign financed the creation of new academic programs in public health, nutrition, human resources, and hospitality management, and newly created graduate programs include an M.A. in Psychology (Industrial and Organizational Psychology) and an MBA concentration in entrepreneurship.

New facilities and renovations are the most visible outcome of the Beyond Strong campaign. These projects include the newly renovated Johnson Hall that consists of the Jo Ellen Ammons Welcome Center, the Bobbitt Clay Williams Executive Suite, and the Elizabeth Triplett Beam Fountain Plaza in front of the building. The Lowery Fitness Center was also created, increasing the size of the fitness center by 5,400 square feet. Kresge Auditorium was recently renovated giving the campus community an inviting place to hold meetings and lectures. The sustainable garden on campus was named the Dickson Foundation Community Garden, and Belk Dining Hall was renovated.  Additional gifts supported other renovations and infrastructure upgrades including electrical, technological, and grounds/lake enhancements.

The Meredith community rallied around Beyond Strong │The Campaign for Meredith. Faculty and staff giving increased from 26.7% before the Campaign to 73.2%  in the campaign’s final year. Before the launch, the Meredith Fund raised $700,000 per year and in 2017-18 increased annual giving to $2.3 million. Meredith parents contributed more than $3 million.

The Campaign also raised nearly $40 million in planned gifts that will benefit Meredith in the future.