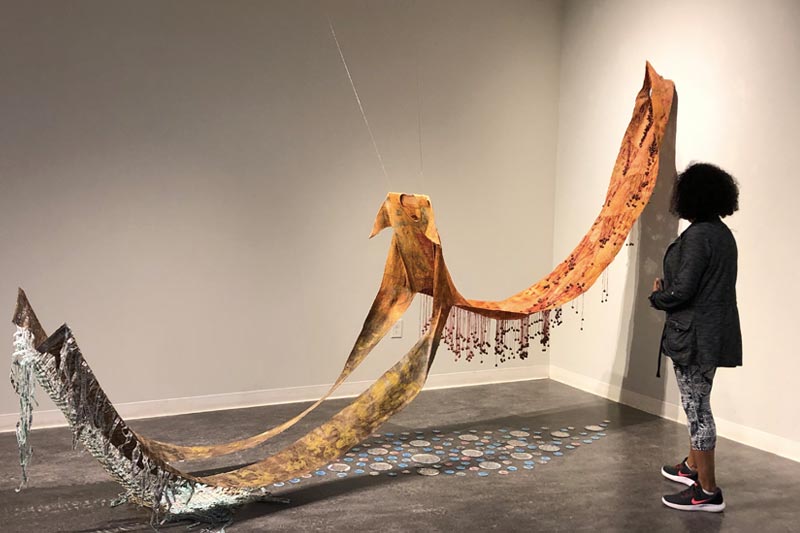 On Thursday, February 7, Meredith College invited Jan-Ru Wan to discuss the connection between art, religion, and spirituality as part of the Mercer-Kesler Lecture Series hosted in the Gaddy-Hamrick Art Center. The exhibition is called  “Observing the Inner Voice.”

In her lecture, Wan gave background on her artistic methods and how her home, Taiwan, has heavily influenced her work. She created her work by incorporating basic needs of human life and materials that move and inspire her. Some pieces involve her fathers’ shirts, others have human hair, and so on.

“I get inspired by the objects I find,” said Wan. “I don’t seek out items based off an idea I have, I see them in random places, and they speak to me.” 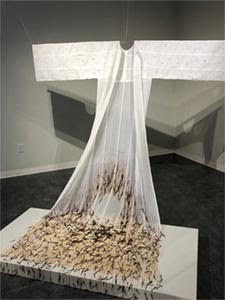 Wan is heavily influenced by her place of residency and struggled to find a way to express herself in Western culture. Being at ease in her environment is essential to her creativity. “When I’m comfortable I become more curious, and as a result I become more creative.”

She believes that no matter where each person is from, we all have connections with each other, so she creates art that everyone can relate to. “Regardless of religion, culture, or society, we as humans are all similar to one another,” said Wan.

Kelsey Cheeks, ’21, was moved not only by Wan’s art, but also by her words. Cheeks was particularly touched by Wan’s message for women. “Wan recognizes that women are often silenced, but silence can be a very powerful tool that speaks louder than words,” said Cheeks.

Even as a successful artist, Wan doesn’t believe that she is generating anything alone. “I don’t feel like I’m a creator, I’m just a collaborator with all the elements,” said Wan. “When I finish a work, I transform part of myself into that work.”

Lisa Pearce, associate professor of art and gallery director, takes charge of finding artists to feature in the Weems Gallery. “The first thing I think about is the student population and who I haven’t touched,” said Pearce. “I try to look at every department on campus and how interested they would be, along with their students.” 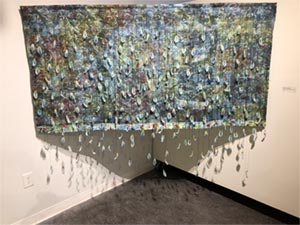 Pearce strives to get the entire Meredith community involved with the artwork being exhibited. She first met with Wan 18 months ago and felt that her artwork not only fit well with courses being offered in the art department this semester, but that it reached many other departments on campus.

“Her work can be looked at from a political, sociological, religious, or ethical standpoint,” said Pearce. “These pieces tie in beautifully with many students’ majors on campus.”

This lecture series is made possible thanks to the generous support of the Mercer-Kesler Fund and the Mary Stowe Gullick Fund.