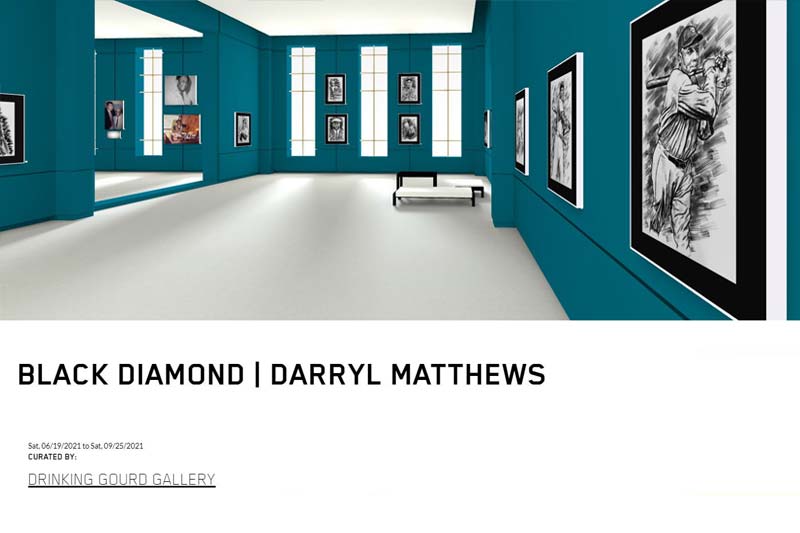 Titled “Black Diamond,” the solo exhibition pays homage to Negro Leagues Baseball players and explores how and why the leagues were such a source of pride for the African-American community. Serving as a catalyst for change and representation of Black achievement, the Negro Leagues underscored the racial, socio-economic, recreational, and political realities of the 19th and 20th centuries.

“It is an honor for Drinking Gourd Gallery to be able to provide a virtual platform for this exhibition,” said Torian. “Darryl Matthews’ work captures the vitality of the Negro Leagues players and explores themes of resiliency and strength. The work also demonstrates the capacity of art to tell past stories and reflect underrepresented perspectives.”

Drinking Gourd Gallery is a virtual gallery space that displays the works of established and emerging artists. Torian named the gallery after the “Follow the Drinking Gourd” folk song as a way to honor the legacy of those who were once enslaved.

“Looking back and ahead, the gallery is dedicated to artistic freedom and committed to showcasing diverse voices and perspectives,” Torian said. Known for its eclectic, ever-changing collection, Drinking Gourd Gallery presents exhibitions and programming that inspire and engage the community.

The Black Diamond exhibition will be viewable on the Drinking Gourd Gallery website from June 19 through September 25, 2021. As a virtual space, the gallery is open 24/7, 365 days a year. Admission is free and open to the public.