Making Aristotle Accessible − With Help From A Hit Sitcom 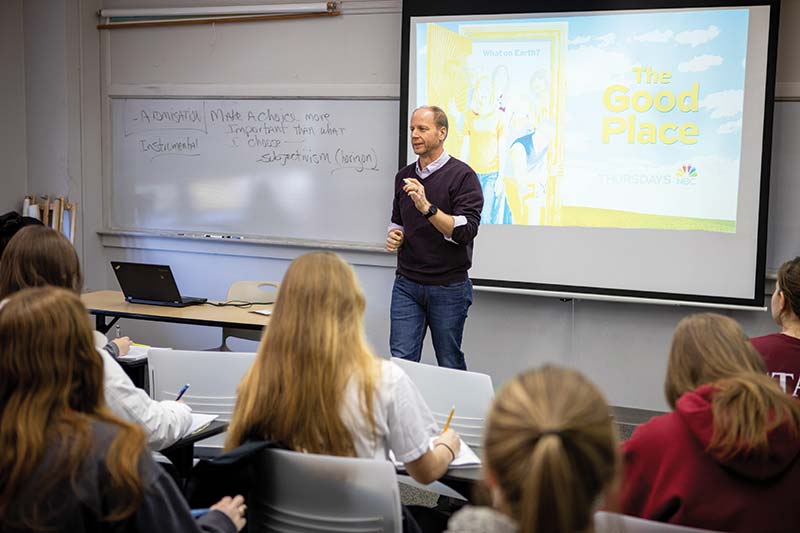 With NBC airing The Good Place series finale on January 30, 2020, we are republishing the following feature article, which originally ran in Meredith Magazine in 2019

In RES 104, Meredith’s course on religious ethics and social issues, students wade into the obvious topics – utilitarianism, existentialism, and influential texts by philosophers such as Immanuel Kant, Jean-Paul Sartre, and Aristotle.

But then the syllabus for Associate Professor of Religious and Ethical Studies Steven A. Benko’s class takes an unexpected turn. Benko’s homework assignments also require students to watch The Good Place, NBC’s hit comedy starring Kristen Bell, the voice of Anna from Disney’s Frozen, and Ted Danson, who rose to fame playing Sam Malone on Cheers.

Using a TV sitcom to teach students about ethical theories and moral values might seem like an unorthodox approach, but Benko’s course featuring The Good Place is now a sought-after class at Meredith. In fact, both students and faculty members say his innovative teaching method is an especially effective way to make complex ethical theories easier to understand.

“If you just start reading Kant and all about utilitarianism and ethical egoism, it’s really hard to grasp those ideas,” said Laken Eby, a December 2018 graduate with an exercise and sports science major and minor in religion. “In The Good Place, we were able to see those ideas in play.”

The Good Place, now in its third season, is a hit with academics like Benko, who spend their professional lives sorting out the issues that the show addresses. The show’s creator and writers regularly cover thorny philosophical conundrums and consult with academics as they build their storylines.

In the first season, the main character, Eleanor, played by Bell, finds herself in The Good Place in the afterlife, but realizes she is there by mistake. So, she makes efforts to improve herself, in part with the help of Chidi, a university ethics professor, who also has landed in The Good Place.

“I don’t know very many academics who don’t watch the show and focus on Chidi and obsess over every little thing that he does and whether they have gotten it right,” Benko said.

Soon after it launched, Benko was hooked. “I saw how seriously they were taking philosophy,” he said.

Benko talked about the show as he taught RES 104 in fall 2017, but officially included it in the syllabus for the spring 2018 class. He took a break from teaching it in fall 2018 to co-edit a book of essays on The Good Place for Open Court Publishing Company.

Sarah Roth, dean of Meredith’s School of Arts & Humanities, said anything faculty can do to help students make connections between the classroom and real life, especially in a class on ethics, is critical.

“It’s so important for students, for citizens, for professionals to bring a sense of ethics into what they do,” Roth said. “It’s a different technique, but I think it might be a more effective technique than talking strictly theoretically.”

Benko has pulled pop culture into his class before. “One of my strengths as a teacher,” said Benko, “is the ability to find the reference that makes the theory accessible to students.”

But RES 104 is the first time he’s based an entire class on a television show. To create the course, he’s watched each episode in the first two seasons five to seven times - and 8:30 p.m., Thursdays, are sacred when the show is on.

Benko said The Good Place works so well as a show – and as a text for his class – for three primary reasons.

It makes philosophy accessible to the average person, who isn’t steeped in the musings of Plato or Hume, by applying their teachings to relatable 21st century dilemmas.

The show features women as philosophers, which is particularly important for Benko as he teaches a class entirely made up of women. Another character, Tahani, follows a similar journey with Eleanor.

“Both women are shown engaging with philosophy, learning it, and understanding themselves better than they would have otherwise,” said Benko. “That’s really important for the students to see: women being active agents in their own creation and self-understanding.”

Finally, The Good Place takes knowledge seriously, portraying characters who seek to better themselves through study and self-reflection.

“There is moral growth on this show, and it’s not easy and it’s not obvious,” said Andrew Pavelich, an associate professor of philosophy at University of Houston – Downtown and co-editor of the book on The Good Place with Benko. “... They have to learn what the right thing is.”

In the classroom, The Good Place has provided fodder for lively discussions that considered everything from ethical theories to how women are portrayed in media and how the show tackles the afterlife but remains secular.

Students read texts by historical and contemporary philosophers that are related to the episode they are assigned to watch. They also turn in a writing assignment about whether the featured ethical theory would get someone to The Good Place.

“Even without the TV show, it would have been one of my favorite classes, if not my favorite,” said Madison Gladwell, a junior double majoring in psychology and political science and minoring in criminology. “I thrive off of debate, and Dr. Benko has this amazing way of questioning literally everything.”

Bailey Birtchet, a sophomore graphic design major who is minoring in marketing, said the class reinforced her own beliefs, but made her think more deeply about them.

“It made me re-evaluate a lot of my actions and inactions that I will take in the future, based on these ideas that I’ve learned and these moral philosophies,” she said.

Benko’s book with Pavelich, The Good Place and Philosophy, will feature a collection of essays by academics on topics related to the show. Slated to come out in spring or summer 2019, it is intended for a general audience and will be widely available. Both Benko and Pavelich also will have essays in it.