Grimes Dives Deep Into the Origins of Alchemy in First Book 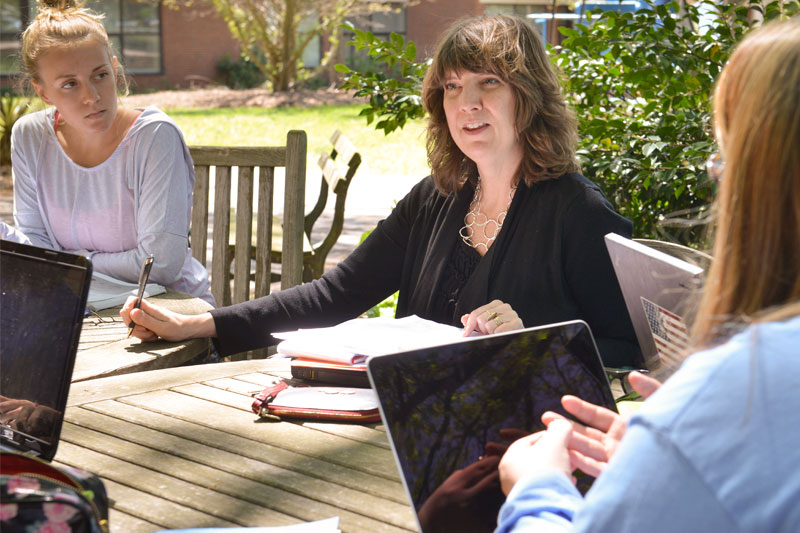 Shannon Grimes, professor and head of the Department of Religious and Ethical Studies, just published her first book, Becoming Gold: Zosimos of Panopolis and the Alchemical Arts in Roman Egypt. It’s the first book in a series on Greco-Egyptian alchemy. Her book offers a new perspective on early alchemy and its origins.

“I’m very interested in religious views of the natural world,” said Grimes. “My expertise is in religion in the Greco-Roman world, so alchemy, which emerged during this period and combines religion and chemistry, is something that intrigued me."

At a very young age, Grimes was always fascinated with other cultures and religions. Some of her friends throughout her childhood were refugees from Laos and Cambodia, which inspired her to learn more about religions around the world. That passion led her to study religion in college.

While earning her master’s degree, Grimes took a course on alchemy. At that time, she struggled with the subject and didn’t understand some of the concepts. It was that challenge that made her want to dive deeper. She was determined to understand it.

“It’s what education is all about – challenging yourself,” said Grimes.

When it came to writing her book, Grimes took an interdisciplinary approach to her research. She studied religion, science, art history, ancient history, astrology, and metallurgy.

“It’s the same way we prepare our students at Meredith,” said Grimes. “We prepare them for success by teaching them different subjects and diving into different areas – that’s liberal arts. That speaks to the value of a liberal arts education.”

Because of the nature of her topic and its historical context, her resources were all written in Greek and Syriac, translated into French. That required Grimes to wade through languages and translations. She hired Meredith student Berekia Divanga, ’19, who is fluent in French, to assist her with reading through the French materials and translating some passages.

Zosimos being an alchemist from ancient Egypt, Grimes had to get inside his world. She looked at images of Egyptian temples and mines, visited museums, and explored collections of Egyptian artifacts.

Her book is written as a cultural biography, which means she focused on the local culture of his city and tried to imagine what the culture was like during this time – studying the rituals and temple practices. Grimes also studied ancient Egyptian theology.

“In ancient Egyptian theology, everything is divine – the sacred is throughout. Earth is divine. Metals are divine. They have a sacred view of nature,” said Grimes. “I love exploring and looking at other traditions with similar aspects. I love bringing out the sacred view of nature. I think it’s important in this age of environmental degradation.”

A big part of alchemy, according to Grimes, can be traced to the art of statue making – including the process of making statues of the gods. This involved rituals that enabled priests to awaken the divine spirit within the statue. Alchemists like Zosimos also worked to awaken their own divine nature, realizing the divinity within themselves and within the world.

“It’s so rewarding to understand how deep and how far you can go in research,” said Grimes.

With her first book published, Grimes is beyond excited about the finished product. However, it wasn’t her plan to publish a book on alchemy at this time. She was sought out.

“The publisher read my dissertation and contacted me about writing a book for a series he was planning on Greco-Egyptian alchemy,” said Grimes. “My research was a perfect fit for this series.”