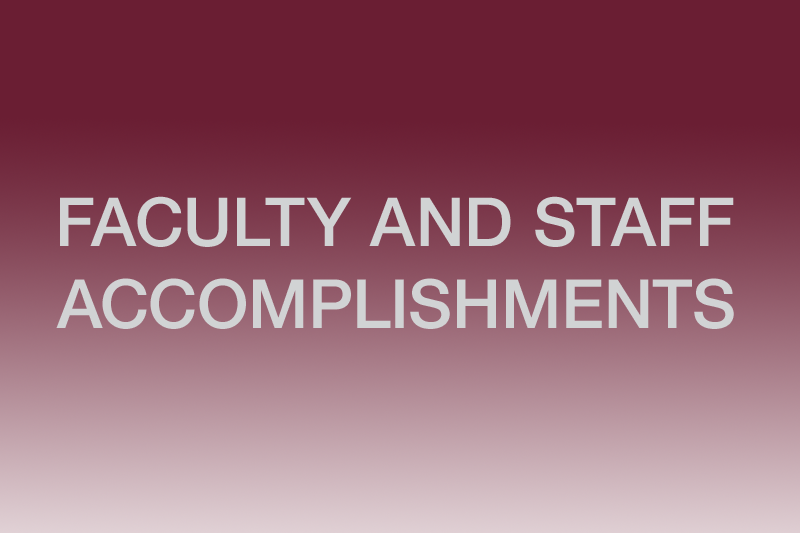 In this issue, we celebrate the accomplishments of faculty and staff in business, child development, English, history, music, nutrition, political science, psychology, and  technology services.

Assistant Professor in the Department of Nutrition, Health, and Human Performance Rebecca L. Hagedorn had an article about expanding SNAP benefits for college students published in The Conversation on April 5. She also appeared on the Let’s Go There with Shira & Ryan podcast to talk about the article. Listen to the podcast episode.

Professor of Music Kent Lyman  has been working for several years as a chamber music coach for the North Carolina Chamber Music Institute, a program that provides young local musicians the opportunity to play instrumental chamber music in a variety of configurations, including string quartets, piano trios, piano quartets, piano quintets, wind ensembles, etc. Dr. Lyman uses his experience and expertise in chamber music with piano to coach the groups that include a piano. One of the groups he has been coaching this year is a piano trio called Trio Serio, consisting of siblings Max Yates on piano, Catherine Yates on cello, and joined by Jaeyee Jung on violin. The other coaches of the group are Elizabeth Beilman, cellist and Executive Director of NCCMI, and Rebekah Binford, violinist and recently retired Assistant Concertmaster of the North Carolina Symphony Orchestra. Trio Serio has had a number of notable successes this year. In October 2020, they won First Prize in the University of South Carolina Chamber Day Competition. They were recently accepted to compete in the Quarterfinal round of the Fischoff Chamber Music Competition, considered the most prestigious chamber music competition for young musicians in the country. They recently won first prize in the Federation of Music Clubs Piano Chamber Music Competition, and will be competing in the North Carolina state finals in May. Watch Trio Serio playing the first movement of Brahms’s Trio in B major.

Lyman is also a frequent collaborator and pianist with the North Carolina Opera Company. He recently participated in a project with N.C. Opera called Opera in a Box. The presentation was filmed and produced right in our own Carswell Concert Hall. It is directed at audiences who may be less familiar with opera and tries to emphasize the relatability of opera, and its universal appeal. Lyman provides all the accompaniment for the arias, the ensemble pieces, an opera quiz show, and even a sendup of Mad Libs, done in the style of operatic recitative. The show’s principal host is mezzo soprano, and Meredith alumna, Rachel Stenbuck. The 40 minute program is viewable on Youtube:

Associate Professor of Political Science Whitney Ross Manzo presented a talk to the League of Women Voters of Orange, Durham, and Chatham counties on April 20. Her talk was titled “For the Living and Not the Dead: The U.S. Constitution, Then and Now” and was part of their series on The State of Our Democracy.

Assistant Professor of Management Information Systems Megan Martin, along with her coauthor, published and presented an article titled “A Plasma Collection Center Task Assignment and Tour Scheduling Problem with an Emphasis on a Cross-Trained Workforce” at the Southeast Decision Sciences Institute 48th Annual Conference.

Associate Professor and Program Director, I/O Psychology Joseph Mazzola was featured in WalletHub’s piece about States with the Best Work from Home Infrastructure. Read at wallethub.com

Assistant Professor of History Amy O’Keefe gave a talk, “Ready to Lead: Lessons from Chinese Protestant Women Who Challenged Conventions and Questioned Patriarchy Ninety-Nine Years Ago,” on April 19 to the Leadership Development Network – Triangle Chapter at Duke Energy. Earlier this spring, she also gave a talk called “Between a Rock and a Hard Place: Women Navigating Confucian and Christian Traditions of Patriarchy at the National Christian Conference of China, 1922,” at the Currents, Perspectives and Methodologies for the Study of World Christianity and its Interactions with Other Religions Conference, held by the Princeton Theological Seminary.

Dietetic Internship Director Cathie Ostrowski has been awarded the North Carolina Academy of Nutrition and Dietetics 2021 Outstanding Dietetics Educator Award. The purpose of the ODE award program is to recognize the teaching, mentoring, and leadership activities of faculty in ACEND-accredited dietetics education programs.

Professor of English Kelly Morris Roberts has had her manuscript, “Integrating Feminist Theory, Pedagogy, and Praxis into Teacher Education,” accepted to Sage Open, the peer-reviewed, open access journal for original research in the humanities and social sciences.

Adjunct Professor of Political Science Frank Rogers gave a talk, “American Democracy- Neither Fragile Nor Robust But the System Held,” to the League of Women Voters of Orange, Durham and Chatham counties on April 7,  as the initial lecturer of their five week lecture series on The State of Our Democracy.

Senior Programmer/Analyst Gus Vandermeeren was featured in a WRAL news story about his roadside cleanup efforts. Vandermeeren has supported the environment by picking up more than 2,000 bags of litter in Raleigh. Watch the segment.

Vandermeeren has just joined the Client Advisory Board  at Ellucian, the company that supplies the software that runs most of Meredith’s administrative services. Employees have used Ellucian software if you have used Colleague UI, WebAdvisor, or Self-Service.

Director of Instrumental Activities Jim Waddelow was both music director and a performer in the Raleigh Little Theater production of Jason Robert Brown’s “The Last 5 Years” over the weekends of April 9-11 and April 16-18.

Kevin Walker, the Print & Copy Manager, presented at the Association of College & University Printers conference. He presented alongside a peer at Penn State to talk about staffing levels and solutions.