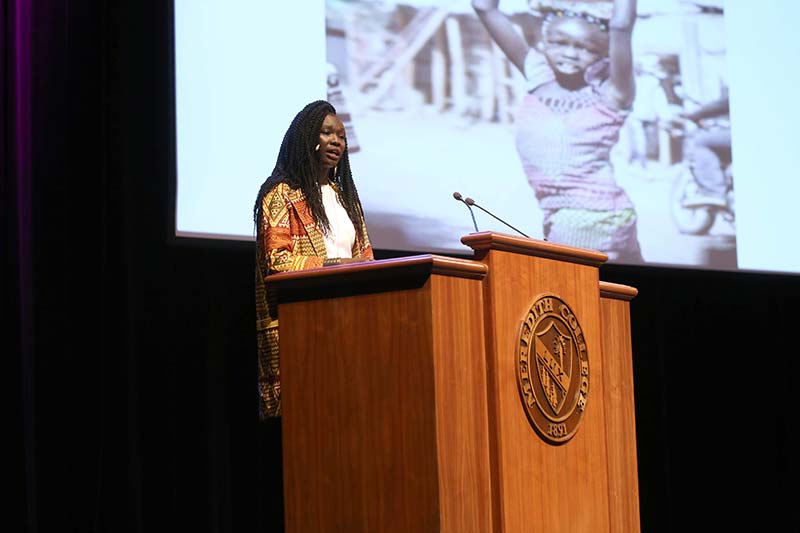 Education activist Mary Maker delivered a presentation, “Why I Fight for the Education of Refugees (Like Me),” to the Meredith community on Tuesday, March 5, 2018, in Jones Auditorium.

“I have scars all over my feet from the months it took me to walk from my home country, South Sudan, to Kakuma Refugee Camp in Kenya,” said Maker as she opened her talk. “In the novel Little Bee, Chris Cleave writes ‘Scars are never ugly. That is what the scar makers want us to think. But you and I must come to an agreement to defy them. We must see all scars as beauty. Okay? This will be our secret. Because take it from me, a scar does not form on the dying. A scar means, I survived.’”

Maker said she proves this idea to be true. “I am a refugee and I did survive. The scars on my feet led me to Kakuma Refugee Camp and to my very first school. And I am so proud of that.”

As a refugee from war-torn South Sudan, Maker spent the majority of her childhood at Kenya’s Kakuma Refugee Camp. It was there where she attended her first school and discovered a love for education.

Maker was four years old when she fled South Sudan. As a child, she didn’t understand what was going on, all she knew was that she fled a campaign of violence. When she arrived in Kenya and attended school for the first time, it was seeing kids her own age in the classroom that rejuvenated her and gave her hope.

“I knew education was the remedy to my shattered life,” said Maker. “I was so proud of myself when I was able to speak in Swahili and English, which are the main languages in Kenya, and when I learned how to write my name on paper for the very first time.”

Like many refugees, especially women, her journey through education was not an easy one. In her culture, women are not given the opportunity for an education. It is considered a waste of time and money to educate women. For Maker, people invested in her. Her father invested in her.

When Maker was seven years old, her father took her out of the camp and enrolled her in a boarding school. As an international student, Maker faced many challenges but never stopped trying.

“I was lucky enough to have a father who supported my education,” said Maker. “However, I still faced challenges. I was always different from my fellow students. I was taller, I was darker, and I was older. And I couldn’t speak proper English,” said Maker.

With the loss of several family members, including her mother, at the age of 13, Maker eventually made her way back to the camp to take care of her younger siblings. That meant that her dream of completing her education was on the line. Fortunately, her aunts and half-sisters stepped in and offered to take care of her siblings so that she could continue her educational journey.

Even with the passing of her father during her first year of high school, struggles to pay her school fees, and not passing her final exams to advance, Maker kept fighting. Her motivation was a quote from her father, ‘Education is your first husband. Marry it.’

“I wanted my younger sisters to see me as their hope, to see me fight for my education, and for them to realize the importance of education,” said Maker.

Maker moved to Nakuru, found a mentor who believed in her, and continued her education. With her school fees paid and money in her pockets, Maker finished school, passed her final exams, and returned to the camp as a symbol of hope for other refugees.

Since refugees are limited to working in the camp because they are not legally permitted to work in Kenya, Maker worked as a teacher. “I was a refugee teaching other refugees. I hadn’t been trained how to do it, but that didn’t matter, I was committed to doing the best I could for my students.”

With fewer than one-fourth of the students in the school being girls, Maker serves as an advocate for women and education. She continues to fight for girls in the camp and for their right to be educated.

“We all have scars – refugees and non-refugees. Some scars are not obvious but we carry them anyway,” said Maker as she closed her talk. “The way we choose to look at our scars is what makes all the difference. How do you look at your scars? I am a refugee, I did survive, and I will continue to survive to fight for the rights and for the education of all the girls and sisters that I left in the camp. And I would love it if you all will join me in this fight.”

This event was sponsored by the Meredith College Convocation Committee.