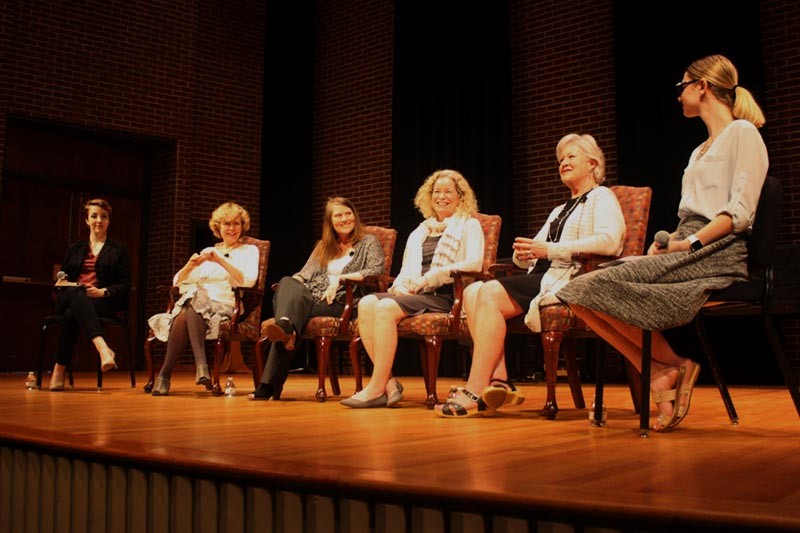 A panel of scholars from four different disciplines in Meredith’s School of Arts & Humanities engaged in a lively conversation about the School’s Common Academic Experience theme for the semester, social inequality. The panel discussion was held on April 13, 2018, in Carswell Auditorium,

The centerpiece of the discussion was Marie Antoinette, the subject of the play performed by Meredith Ensemble Theatre this month.

Student moderators Sidney Shank and Mimi Mays asked the panelists questions about the French Revolution and the way Marie Antoinette has been viewed in the two centuries since the Revolution. They began the dialogue by asking whether Marie Antoinette was held back by her gender or privileged by her class.

Historian Angela Robbins and French scholar Veronique Machelidon provided the audience with background on the political and economic forces surrounding Marie Antoinette in the lead-up to the Revolution. The panelists also pointed out the ways the Austrian-born queen defied gender expectations for female royalty in eighteenth-century France, intensifying her unpopularity both at court and among the French people in general.

Theatre professor Catherine Rodgers, the director of Marie Antoinette, told the audience that the queen comes across as a relatively sympathetic, multi-layered character in David Adjami’s play, which was written in 2012.

Associate Professor of Sociology Amie Hess discussed the limitations of all revolutions, including the French and American Revolutions. “At their heart, revolutions are about making a radical change—about upsetting the apple cart,” Hess explained. “But some people don’t want a fully radical change because they have a stake in retaining at least part of the status quo.” As a result, the French Revolution did not champion women’s rights, and the American Revolution left the institution of racial slavery largely intact.

Sarah Roth, the Dean of Arts & Humanities, opened the panel by talking about how the panel fits into this semester’s Common Academic Experience.

“The panel embodies the spirit of interdisciplinary conversation and exploration that is the hallmark of the Arts & Humanities Common Experience,” Roth said.

The Common Experience is designed to expand students’ understanding of a particular topic by investigating that topic from many different disciplinary perspectives and by engaging in a meaningful dialogue about it.