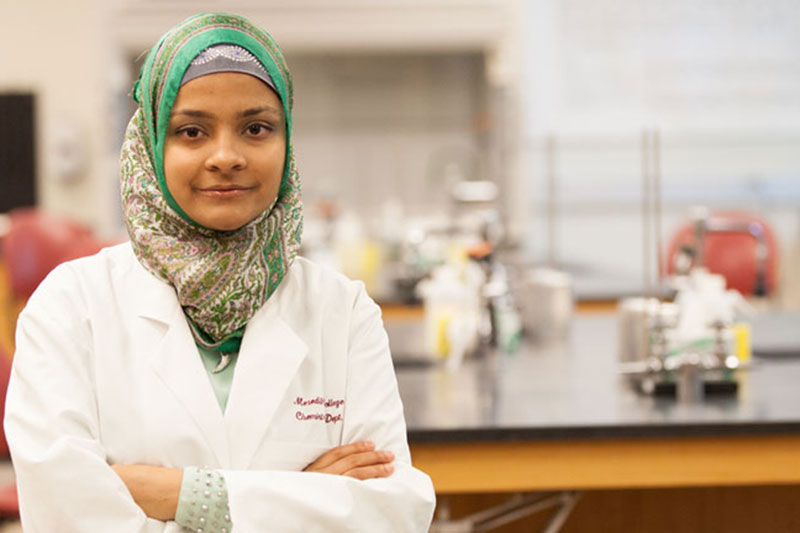 Zeenat Razvi, ’13, has been awarded a 2014 National Science Foundation Graduate Research Fellowship – the oldest graduate fellowship of its kind in the country, and one of the most prestigious.

Razvi was a Meredith Legacy Scholar who pursued her passion for research throughout her time at Meredith, starting her freshman year. Originally from Karachi, Pakistan, Razvi was an active participant in Meredith’s Undergraduate Research Program (URP). She presented her work at regional and national conferences, where she won multiple awards. After graduating from Meredith, Razvi went on to Duke to pursue her Ph.D. in chemistry.

She was quick to give Meredith credit for her success in applying for and receiving the fellowship.

“Meredith faculty, especially those in the chemistry department, were instrumental in helping me get this fellowship, from initially encouraging me to apply to helping me write the application,” said Razvi.

She also noted the work she did through the Undergraduate Research Program was essential.

“I wouldn’t have been able to do multiple summers and semesters of research without funding from URP – and without undergraduate research experience, getting this fellowship would have been near to impossible,” said Razvi.

Razvi also expressed appreciation for the Meredith Legacy Scholarship. As Meredith’s most prestigious scholarship, it is awarded based on superior academic achievement, intellectual promise, and leadership ability and includes funding for study abroad. Razvi’s experience in Sansepolcro, Italy was a factor in receiving the NSF Fellowship.

Kassy Mies, who served as Razvi’s academic and research adviser during her time at Meredith, rated Razvi as being in the top one percent of all students she has taught at Duke University, Meredith College, and Randolph-Macon College.

“Throughout her four year experience as an undergraduate, I had the privilege of watching Zeenat develop as a researcher, an academic, a leader, and a person.  Her abilities to understand, reason, analyze, problem solve, and synthesize are incredible, and I truly consider myself lucky to have taught and advised her.  This well-deserved NSF Fellowship is another great stepping stone in her pathway to an amazing and impactful future,” said Mies.