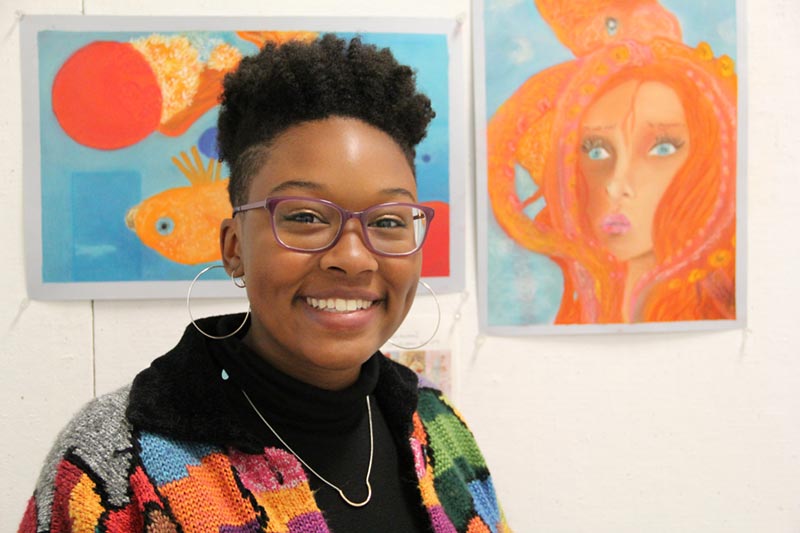 At Meredith, Shila Alexander, ’21, has learned the importance of community building, educating, and listening to others — all values she plans to take into her future classroom.

As a member of strong advocacy groups on campus like Artist’s Alliance, Spectrum, and Angels for the Environment, Shila has worked to make a difference in the community.

“One of best things about attending a women’s college like Meredith is seeing the support and positivity from women in authority and fellow angels,” said Shila. “In a world where the divide is growing stronger politically and socially, it’s amazing to see women who uplift women.”

Upon graduating with her degree in art education with a K-12 licensure, Shila will become an art teacher at a public school in Wake or Durham county. She also hopes to continue her education by getting a master’s degree in fine arts and education to better prepare her for a career as an art educator. Growing up, Shila used art to express herself and as a means to cope through hard times. As a teacher, she hopes to support her students by letting them embrace their creativity and one day help someone find their calling as an artist.

“I would like to become an important figure within the educational system and the arts community by helping to create programs and improve existing ones as well,” said Shila.

Driven by her passion for helping people, Shila became a Service Scholar — an opportunity that allowed her to give back to the outside community by volunteering at least 35 hours each semester. Through the program, she volunteered at the Salvation Army Center of Hope in Raleigh, where she was able to work with the homeless community.

Expanding on her efforts, Shila also supported the homeless community through the LGBT Center of Raleigh during her time at Meredith. In working with these underserved communities, she learned that the LGBTQIA+ community, specifically the youth, have higher rates of homelessness. As a strong ally for this population, Shila became passionate about shifting her focus to specifically support this group.

“As an ally and someone going into education, I find it hard to believe that individuals would send their children off because of who they are and who they love,” said Shila. “I decided to volunteer at the LGBT Center of Raleigh to better advocate for those in need.”

In her time at Meredith, Shila has truly found her voice and is no longer afraid to ask questions and initiate change. She has learned how to speak up for what she believes in and embrace her authentic self while being able to befriend like-minded women passionate about the same causes.

“I am thankful for the opportunities that Meredith College has given me to grow,” said Shila. “I have learned to be comfortable with who I am and what I bring to the table. I learned that having a group of supportive friends goes a long way. I learned that I can do things that I never really thought that I could do before.”

Learn more about the Service Scholars program at Meredith