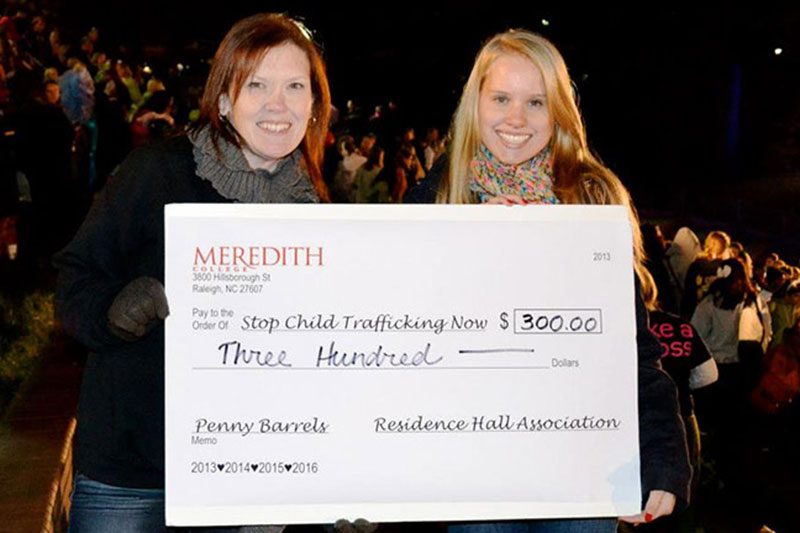 Rebecca Wyatt, ’14, came to Meredith and found her place.

“Meredith gave me the unique ability to identify my passions and carve out my own place of belonging,” she said.

A self-described “missionary kid,” Rebecca’s seen the world. She’s spent time in Bangkok and Chiang Mai, Thailand; Toronto and Ottawa, Canada; and many cities in North Carolina and Virginia.

Her global experiences exposed her to the injustices of the world. “A desire grew in me to seek out opportunities to help those being marginalized and mistreated,” said Rebecca.

That desire led her to pursue a degree in social work. And when she read Half the Sky, Meredith’s Summer Reading Programselection her freshman year, fighting human trafficking quickly became a related passion. She set out to create a group on campus to raise awareness of the issue, as well as provide an opportunity for students to assist organizations that work directly with victims.

“I was supported in starting the Angels Against Trafficking,” she said. “I contacted the chaplain about the possibility of creating the organization. She believed there was interest in the issue on campus.”

The group she started has flourished. “Angels Against Trafficking has good participation on campus and is successfully led by passionate students,” said Rebecca.

Her involvement hasn’t been limited to on-campus groups – although she also served as a leader in the Social Work Club. She completed an internship with InterAct of Wake County, where she worked one-on-one with survivors of domestic violence and sexual assault.

“My internship has been a crucial building block to my experience as a future social worker,” Rebecca said.

She also spent a summer conducting research at Matthew House Ottawa – a refugee shelter in Canada. Her research focused on the assistance refugees arriving in Canada were given by settlement services. She found that aid was often provided without first assessing what refugees actually wanted assistance with.

“I was able to ask newly arrived refugees what they felt they needed to be economically self-sufficient,” she said. “My research allowed me to collect data that represented this population and gave them a voice in the services they receive.”

After she graduates from Meredith, Rebecca will attend the one-year Advanced Standing Master of Social Work program at the University of Pennsylvania. She then plans to pursue a career as a social worker – working with and advocating for victims of human trafficking.

“Meredith helped me realize my full potential,” she said. “I am especially thankful for the way that Meredith’s social work program prepared me for my future.”

Just as Rebecca found her place – this strong senior is going to make sure others find theirs in the world.