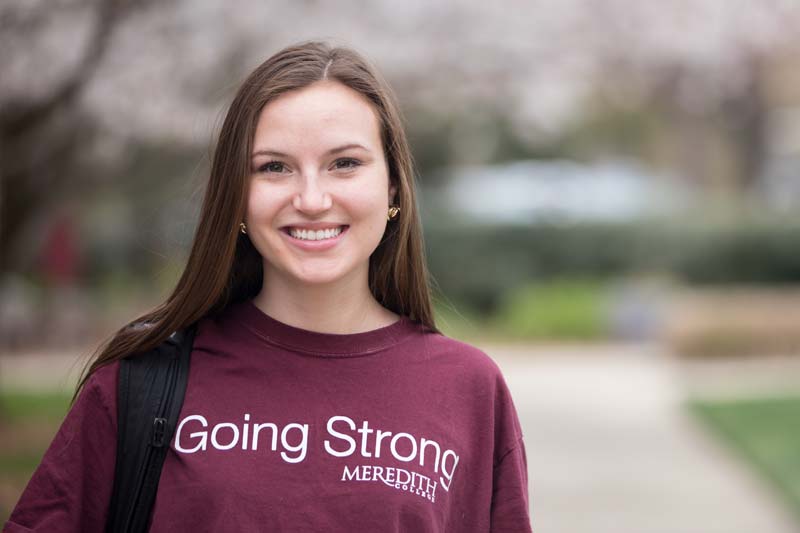 “I really care about both equal rights and equity within rights.”

One of Rachael’s challenges was figuring out what she wanted to do with her life.

“It can be intimidating to be in classes where students have their whole lives planned out, graduate programs they want, who they’re going to marry, etc. A big part of my learning experience was being just me (not dating anyone), taking classes that seemed interesting to me, and going out of my comfort zone and trying new things.”

Although Rachael describes herself as an introvert in high school, at Meredith she discovered her extroverted side. That happened in part through her engagement on campus. She was a student adviser and admissions tour guide. She also served as vice president of her class for three years, was active in College traditions (Guardian Angel Dance and Fire and Water are her favorites), and was active in both the psychology and communication clubs. Her work in the clubs helped her connect with others in her field, both on campus and off.

“Participating in these clubs allowed me to create stronger bonds with my professors and really expanded my knowledge in both psychology and communication by having different speakers, guests, and volunteer activities that push what we learn in class past the classroom.”

She also found Meredith’s women’s college setting empowering, observing that it helped her and others to develop as leaders, in part because of student interactions with one another.

“We really support and build one another up here. We create strong women both intellectually and personally and that is why I chose an all-women’s school – to strengthen myself and other women.”

In addition to support from her peers, Rachael found several important mentors at Meredith, including Professors of Psychology Mark O’Dekirk and Doreen Fairbank. She noted that they went above and beyond – writing recommendation letters, holding study sessions before tests, and helping her remain calm before presentations.

“They have really given me the confidence and support I needed to succeed in class, on my graduate applications, and as a strong student and desirable graduate school candidate,” said Rachael. “They truly care and are passionate about what they’re teaching and it shows when they teach. It is pretty amazing.”

In addition to her faculty, Rachael connected with Brandon Stokes, director of retention and student success.

“Brandon Stokes has really been a mentor to me. He has written recommendation letters and let me talk about all things school or frustrations in general, and share the joyous moments of getting into graduate school. I love how much he cares about the students at Meredith and making sure they’re having a successful college career.”

A student worker in the Office of Retention and Student Success, Rachael also conducted undergraduate research on first-year students and the most effective ways to help them succeed. She presented her research at Celebrating Student Achievement Day.

That experience helped her land a Graduate Assistantship for Peer Leadership position at the University of South Carolina, where she’ll be attending graduate school to pursue an M.Ed. in Higher Education Student Affairs.

She attributes a good part of that outcome to the support she found at Meredith.

“Meredith gave me role models, mentors, and friends who have cheered me on and made me see the successful person that I am and can be.”

Learn more about majoring in psychology and communication at Meredith