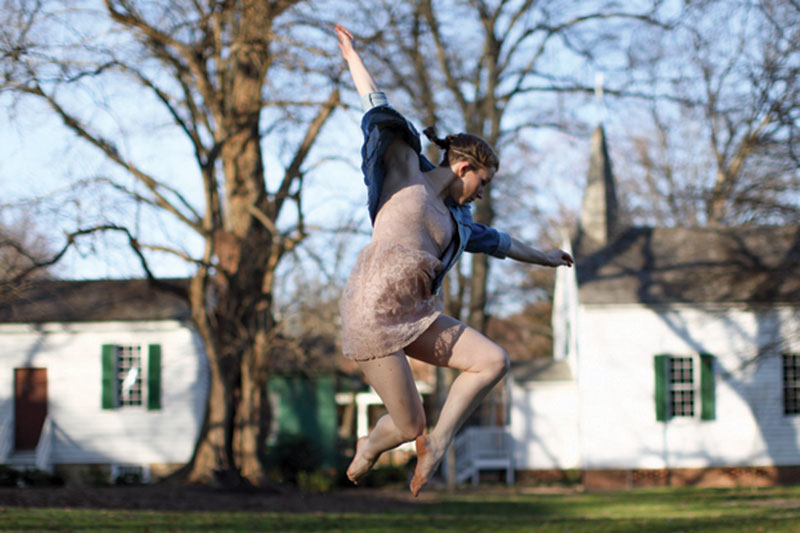 Nicole Lawson, ’16, is a firm believer in the power of dance to educate and transform.

A double major in dance studies and Spanish, she explored that transformative power through her honors thesis, which investigated whether dance could help to increase empathy for people with mental illness. For her thesis she studied an activist dance process and created a piece for DanceWorks, Meredith’s annual spring dance concert, in addition to writing a research paper.

Her concern for mental health issues began when she was fourteen and lost a friend to suicide.

“That experience made me more aware of the struggles of others. I have been involved with mental health activism since then,” said Nicole.

When she came to Meredith, she discovered a desire to use dance as a means of activism. And her interest in arts activism was further fueled by time spent studying abroad in Buenos Aires, Argentina, where she studied theatre, dance, music, and Argentinian performing arts history. Because she had chosen a full immersion program, she spoke nothing but Spanish while she was there. She also met two art activists in Buenos Aires: a theatre professor, Ruben Sabadini, and dance professor, Juan Onofri Barbarato, who both became mentors and influenced her work.

According to Nicole, such relationships with her professors have been at the core of her college experience, both the faculty she met abroad and those at Meredith.

“Of all of the things that Meredith has given me, I am most thankful for my relationships with my professors. Many of the opportunities that I have had have come because a professor, who has a strong relationship with me and knows my work, has approached me with a project.”

Through such projects, Nicole continued to build her resume, working her way up from runner to stage manager, and performing for local and regional dance companies. Nicole also used her leadership strengths to benefit the larger Meredith community by serving for two years as Scholars Weekend Co-chair for the Honors program. And she continued to make connections by working hard and reaching out to people in her field.

“I’m strong because I’m a little ‘scrappy,’ as we would say back home, and because I know that success is impossible without developing meaningful relationships. I have learned how to seek out people who are successful in their careers as friends and mentors.”

After graduation, Nicole will spend the summer dancing and working for the American Dance Festival (ADF). In 2015, she received a scholarship to attend a six week summer program at ADF; she also served as a translator for a visiting international choreographer and a Cuban dance company. Her ability to speak Spanish helped secure her post-graduate position with ADF – and she fully expects that it will continue to play a part in her career.

“Now that I’m applying for jobs, I’m finding that a significant portion of arts organizations need bilingual individuals as a part of their organizational staff. I was never sure how my love of language and dance would mix, but I’m very happy that they did.”