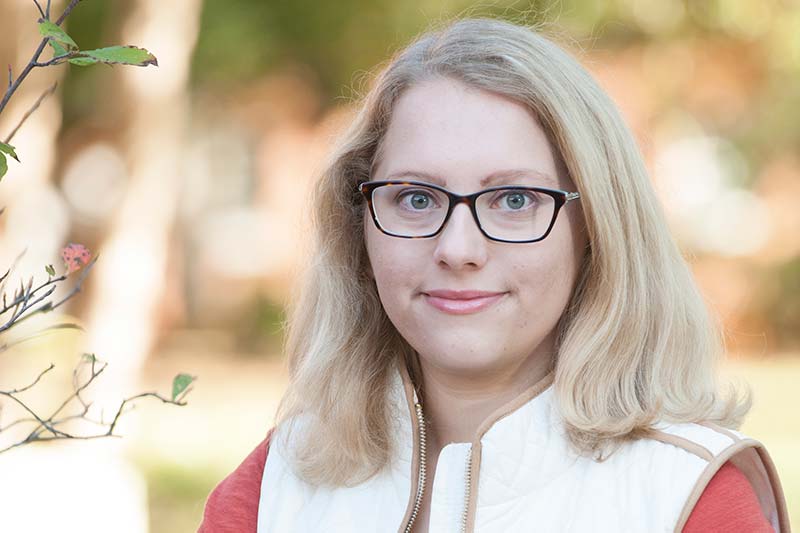 Raleigh native Molly Smerko, ’18, knew from the moment she toured the Meredith College campus that it was where she belonged. She describes her decision to attend Meredith as a gut feeling that she couldn’t ignore.

Aside from her academic achievements, Molly can be found participating in activities from community service initiatives to campus organizations. Having the overall college experience is important to her.

“I think it’s so important to balance academics with all of the events on campus,” Molly said.

Taking on leadership roles has been a big part of Molly’s college experience. As a sophomore, she spearheaded an on-campus suicide awareness and prevention campaign. Molly also served for two years on the executive board for Better Together, an interfaith group. And she has spent time as a student adviser.

“I treasured the opportunity to be a student adviser and mentor first year students,” Molly said. “It was a great way for me to build on my leadership skills.”

From 2016-17, Molly held the Newman Civic Fellowship from Campus Compact, a fellowship for civically minded students. As a result, she had the opportunity to travel to Boston for the inaugural national gathering, which she describes as an incredible leadership experience.

Molly works in the Learning Center as a Spanish tutor and as an intern with Meredith Chaplain Donna Battle. And she still finds time for Meredith traditions such as Cornhuskin’, which she has participated in since her freshman year.

One of her favorite memories is the junior-year tradition of Ring Dinner, in which the junior class receives their class ring and officially becomes a part of the Meredith sisterhood. “My best friends became my sisters. It was such a surreal and magical moment,” said Molly.

Molly did not limit her experience at Meredith to on-campus activities and traditions. Studying abroad in Spain had always been a dream of hers. In the summer of 2017, she chose to join a group from North Carolina State University on a month-long trip. The faculty in Meredith’s Department of Foreign Languages and Literatures was available to her during her time abroad, encouraging her to follow this dream.

“It was great staying in touch with my Spanish faculty while I was in Spain,” said Molly. “Whenever I was feeling homesick I just sent them an email and they were quick to encourage me. They were my biggest cheerleaders from an ocean away.”

After graduation, Molly plans to pursue a Master of Divinity at Union Presbyterian Seminary, where she has received a full tuition scholarship.  “Meredith helped me to be a strong candidate and feel confident in the grad school application process. I feel ready for grad school thanks to everything I’ve learned here,” Molly said.

Molly’s experiences at Meredith have left a lasting impact on her life. “I wouldn’t be the strong and confident woman that I am today if I hadn’t walked through the Meredith gate almost four years ago. My experience at Meredith has taught me to be bold in who I am and in the pursuit of my goals and passions,” said Molly. “I am unapologetically myself, and I thank Meredith for helping me to harness the strength that I’ve had all along.”