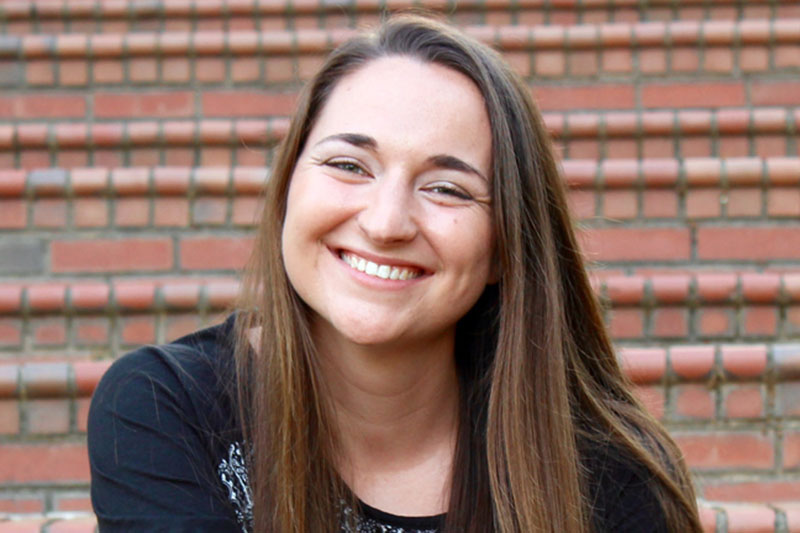 As a student-athlete, campus leader, and dual degree engineering student, Megan Luke, ’17, took full advantage of what Meredith College had to offer personally, professionally, and athletically.

Megan came to Meredith with many different interests and never had to choose just one passion to pursue. She was able to study engineering, play soccer, minor in English, be a part of a local church, and stay involved on campus. And, she managed to find time to complete two internships with Revlon and Burt’s Bees.

“Learning from books is important, but some of the most valuable lessons I’ve learned in college have come from experiences and opportunities outside of the classroom,” said Megan.

With a passion for science and helping others, Megan served as a chemistry and physics tutor in the Learning Center where she found value in using her various interests and strengths.

“It was so rewarding to be able to interpret difficult chemistry concepts into something that could be easily understood by students from different disciplines,” said Megan. “That’s a skill that will directly translate to an engineering career.”

Throughout her time at Meredith, Megan also served as a resident assistant, a student ambassador for White Iris Circle, and treasurer of the American Chemical Society. She was also the service co-chair for Alpha Lambda Delta Honor Society.

Because of the many opportunities available to students, Megan had a desire to want to be involved in everything. She learned a valuable lesson in overcommitting.

“When I’m committed to too many things, I can’t do any of them well,” said Megan. “While I think it’s important to stretch myself and test my limits, I’ve learned the hard way that it’s also crucial to accept those limits once I find them. Instead of trying to do everything for everyone, I want to prioritize so that I can do well the things that are most important to me.”

As a soccer player, dual degree engineering student, and active member of campus life, Megan still excelled in the classroom. The Huntersville, N.C., native is a Presidential Scholar, an Honors Scholar, and a National Merit Scholar. Because of her academic accomplishments, Megan was named to the Vice President’s Club, an academic award for athletes.

She also found great success on the soccer field, where she served as captain. Megan garnered Defensive Most Valuable Player to go along with several conference, state, and academic honors. She also helped lead her team to two USA South Conference Championship titles.

“Being a student-athlete taught me valuable lessons about discipline, leadership, success, and teamwork that have already proved valuable in other areas,” said Megan. “Soccer is one of my passions, and I’m thankful that I got to spend so much time playing the sport I love while also being focused on my education.”

Megan graduated with a B.A. in chemistry from Meredith and a B.S. in chemical engineering from N.C. State. She returned to Joliet, Ill., where she will started her career as a process engineer with Ecolab as a member of their Leadership Development Program.