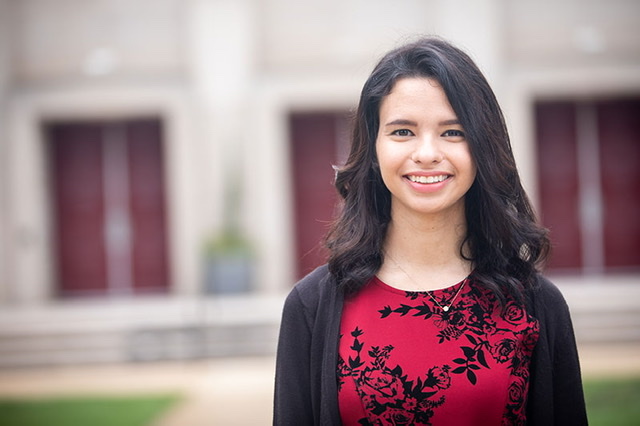 A theatre major, Leslie was selected for a professional stage management fellowship with the Washington, D.C.-based theatre. In October, she relocated to the nation’s capital for a 10-month, full-time position during which she will assist the stage management team on multiple productions.

“Some of my responsibilities will include being ‘on book’ in rehearsals to prompt actors for their lines, tracking props and costumes, and maintaining performance and rehearsal paperwork. I will also assist in running understudy rehearsals. During the run of shows, I will work backstage, and work with other shows and departments on their needs,” Leslie explained.

She is most excited about the high-caliber artists with whom she will work. The incoming artistic director, Simon Godwin, is currently the associate director for the National Theatre in London. The company will also be producing the world premiere of playwright Lauren Gunderson’s retelling of Peter Pan.

“[Godwin] will be bringing a reimagining of his Stratford-Upon-Avon production of Timon of Athens to D.C.,” Leslie said. “And I have been fortunate to read and see some of Lauren Gunderson’s work, and I am in love with her wit, her intelligence, and her commitment to representing marginalized women.”

The Shakespeare Theatre Company’s commitment to diversity and inclusion made it one of Leslie’s top choices to start her post-college career. The company’s mission is to present classical theatre viewed through a 21st century lens.

“They focus on casting and hiring creative staff with diversity in mind,” said Leslie. “I knew a theatre company that cared so much about inclusion was the perfect place for me, as female Mexican-Americans such as myself are historically underrepresented in theatre.”

Leslie had an opportunity to find her place in the theatre world thanks to the well-rounded experience she had at Meredith. Theatre majors are required to be involved in all areas of theatre. As an incoming freshman, Leslie wanted to act – which she did – but she also found a love for stage management.

“While at Meredith I’ve had the opportunity to work as an actor, stage manager, playwright, director, sound designer, assistant set designer, fight captain … the list goes on and on,” Leslie said. “This variety was something I was able to speak about proudly in all of my interviews.”

Leslie represented Meredith at the 2019 Kennedy Center American College Theatre Festival and was nominated for the stage management fellowship for her work on Meredith’s production of Xanadu. She was a semi-finalist in this competition, which inspired her to apply for professional internships in stage management. She credits Meredith with giving her skills and confidence for her chosen career, making special mention of many faculty members in theatre, English, and music for their roles in shaping her experience.

“Without the flexibility, encouragement, and freedom to explore almost every aspect of theatre at both Meredith and in my community, I never would have been able to stage manage Xanadu and end up where I am today,” Leslie said. “Meredith College is a place where I have never been told ‘no, you can’t do that.’ Instead, I’ve always been asked, ‘how can we help you achieve that goal?.’ I am endlessly thankful to Meredith’s commitment to encouraging women to go strong, which built my confidence to go after this prestigious position.”

Explore the performing arts at Meredith