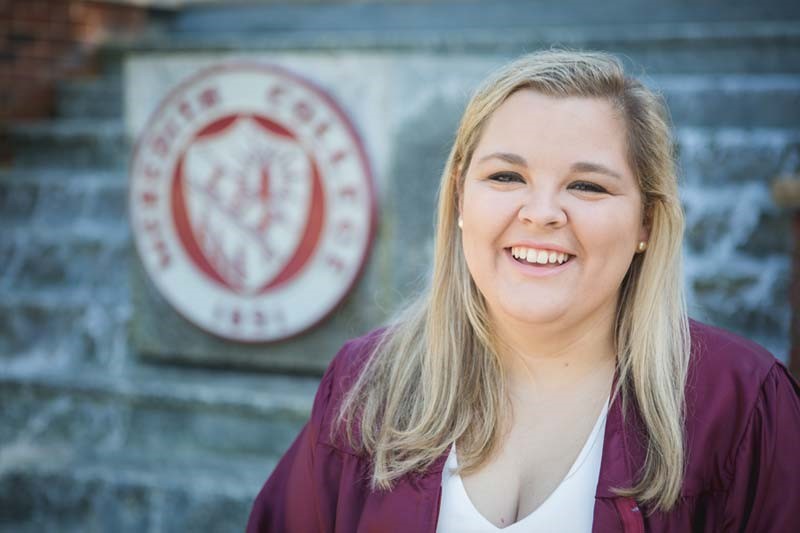 Kelsie set a goal early on to be a student leader. While in high school, she attended Meredith's Looking Towards College. A student adviser for this program was president of her class at Meredith, and Kelsie was inspired by her example.

“Meredith encourages students to be involved and that's one of the biggest ways I've grown as a person,” Kelsie said. “I've learned how to efficiently lead and how to use my strengths.”

When she initially applied to be a student adviser, Kelsie wasn't selected for the position. Meredith’s Student Leadership and Service office suggested she attend LeaderShape, which gave her more leadership skills and increased her confidence. After that, she was chosen to be an event co-chair and the SGA Student Life co-chair in her junior year.

But what she enjoyed most was serving her class, so she ran for, and won, the position of Class of 2018 president for her senior year.

“I'm the person my classmates come to with issues, and as class president I help find solutions. This has given me an opportunity to get to know all the women in my class,” Kelsie said. “It was my goal to make everyone feel included in what the class was doing.”

As class president she will serve as the undergraduate speaker at commencement. She plans to celebrate her classmates’ successes, and to show their gratitude for their families and Meredith’s faculty and staff for being a support system throughout their years at Meredith.

“As we're walking across the stage at commencement, we recognize we wouldn't have been able to make it there without that support,” Kelsie said.

Meredith’s StrongPoints program helped her identify her strengths, which helped her choose her major in communication.

“Before I got to Meredith, I never really thought about what makes me strong. The reason I took my first communication class was because communication was one of my strengths,” Kelsie said. “That led me to what I'm passionate about and what I want to do. Meredith showed me my strengths.”

After she graduates from Meredith, Kelsie will pursue a career in marketing or public relations. She feels well-prepared thanks to her communication courses and her internship in Meredith's marketing department, which have given her hands-on experience in many aspects of the field.

“I'm grateful for all the resources at Meredith. The professors and staff want to see you succeed.”

Learn more about the communication program at Meredith