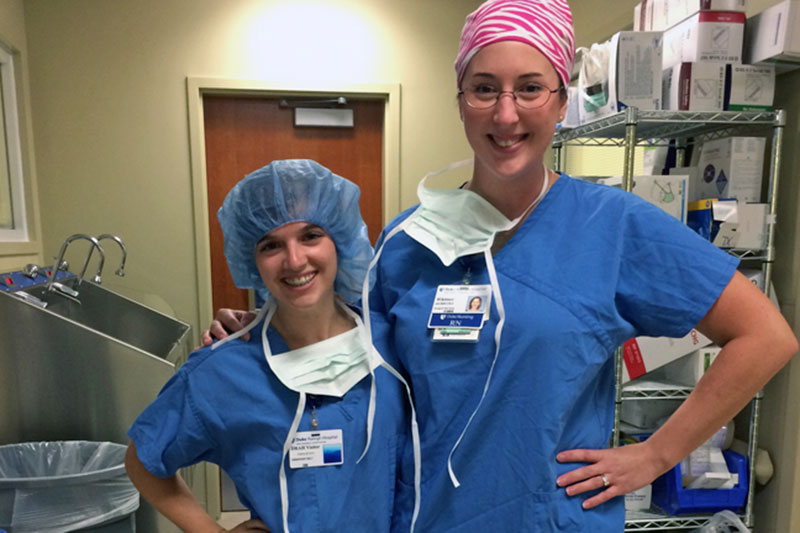 When Katie Brinson, ’15, enrolled at Meredith, she knew she wanted to pursue a career in the medical field. She declared a major in chemistry and a minor in biology and set out to find which career would be right for her.

By assessing her strengths – she thrives when interacting with and helping others – Katie determined she would excel as a nurse. She worked with Health Professions Adviser and Associate Professor of Biological Sciences Karthik Aghoram to find hands-on experiences in the field. Dr. Aghoram suggested she contact his former student, Whitney Rains Taheri, ’09, for a shadowing opportunity.

Whitney is an operating room (OR) nurse at Duke Raleigh Hospital. She’s a part of the neuro team, which means that she assists surgeons with eye, ear, sinus/nasal, spine, and brain surgeries. That’s right. Brain surgeries.

Whitney loves her job. And she loves sharing her passion for nursing with students who are interested in the profession. When Katie asked to shadow, Whitney was all for it.

“This was the first time that a Meredith College student shadowed me at work,” said Whitney. “I was very excited to have a woman from my alma mater want to see what I do as a nurse in the OR.”

As a shadower, Katie did not disappoint. “My favorite part of having Katie shadow me was to hear her ask questions of me and the surgeon,” said Whitney. “It showed that she was genuinely curious about nursing and the details of what I do all day.”

Whitney admired another strength Katie unexpectedly demonstrated in the OR. “The most surprising part of the day was seeing how strong Katie’s stomach is,” she said. “The first time most people see various surgeries, they tend to feel a little queasy, but Katie wasn’t even fazed.”

The experience opened Katie’s eyes to a new and exciting side of nursing – one she hadn’t previously considered as a career. “I got to see all of the tasks that Whitney and the other nurses perform,” she said. Observing the nurses prepare the OR and assist during surgeries reinforced to Katie the importance of their work.

It also affirmed her desire to pursue a nursing career. Although she still has to complete her senior year at Meredith, Katie is in the process of applying to nursing schools.

Summing up the experience, Katie said, “It was thrilling just to be in the operating room and see a surgery performed. I now have a whole new perspective on nursing.”