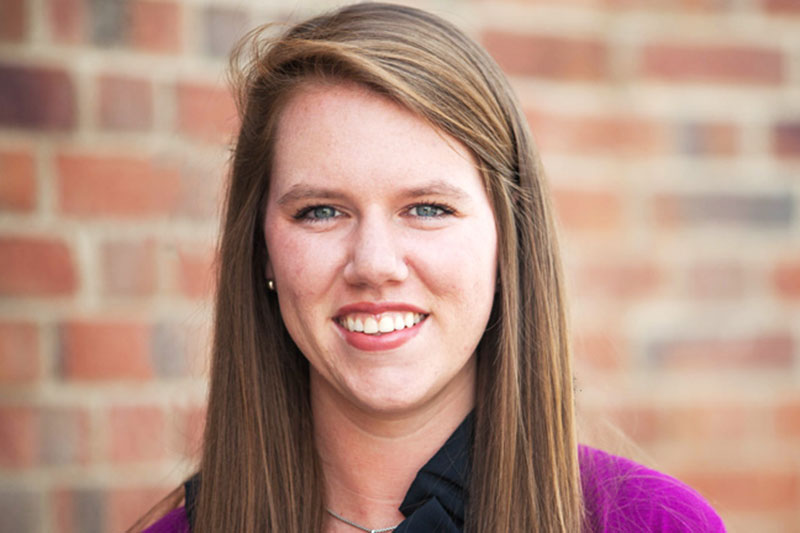 As one of the most decorated players in Meredith athletics history, Karlie Long, ’17, has solidified her name in the Meredith College history books. She never let the challenges of being a student-athlete hold her back from excelling in the classroom.

“Being a student-athlete isn’t always easy, especially last semester when I was going through recruitment for an internship, but it taught me that I was capable of a lot and to continue to push through all obstacles,” Karlie said.

Karlie holds the record for the most kills in Meredith history with 1,536, which is 293 more than second place. A kill is an attack by a player that is unreturnable and leads directly to a point or loss of rally. Along with leading Meredith in kills, she stands in the top 5 in nine other statistical categories, and within the top 10 in two other categories.

“Being one of the most decorated players at Meredith is pretty sweet and still doesn’t seem real, but I wouldn’t have been able to do the things I did without awesome teammates and coaches who helped me get to where I am,” said Karlie.

Aside from holding many all-time records, Karlie was the first Meredith volleyball player to garner All-American recognition to go along with her USA South Academic honors. She is also a four-time All-Conference selection, and was named USA South Rookie of the Year during her freshman season.

Her favorite memory of Meredith is helping to lead her team to a USA South Conference Championship title and punching Meredith’s first-ever ticket to the NCAA Division III Tournament this past season.

“Being a student-athlete was an amazing experience,” said Karlie. “Athletics taught me how to manage my time wisely and allowed me to meet some of my greatest friends at Meredith. It’s also taught me so much about perseverance and how to be a good leader.”

The accounting major has always been good with numbers and knows the versatility that comes with this degree. One of the reasons she majored in accounting was to have job stability.

“I was most excited about the different opportunities that are available in the field,” said Karlie. “No company can operate without an accountant and with the majority of accountants retiring because of age, I will be a solid candidate for any job with a degree from a school like Meredith.”

The senior from Roxboro, N.C., was also a member of the Accounting and Finance Association Club.

When Karlie graduates in May she will spend the summer interning with Cherry Bekaert, a local accounting firm, before heading to North Carolina State University in August to attend their Masters of Accounting program.