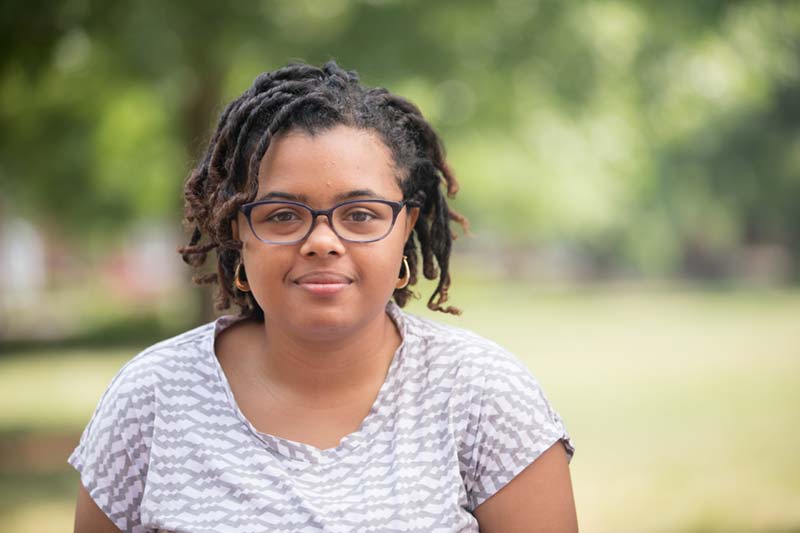 But not just any stories.

“People don’t realize – storytelling is important. It can be used for fun but the person behind the camera has a lot of power.”

At Meredith, Indyah developed her skills and knowledge to take that passion and make a difference in the world using her favorite medium: video.

“Video is my thing. I love video. I want to make videos that educate people and make them want to get involved. I want to be able to express the injustices in the world.”

As a video intern for Meredith’s marketing department, she was mentored by the lead videographer, who strengthened Indyah’s video and photo editing skills. In-depth conversations with the head of media services where she worked on campus taught Indyah about the value of both listening and sharing her own perspective.

“I find happiness in learning about others. I like seeing people for who they are – knowing them as an individual and the strengths they have … and not bringing myself into it. In telling a story I know who my focus is.”

Minoring in sociology and criminology, Indyah has explored social justice through her classes and involvement in student organizations. Several experiences stand out, such as when students held a Black Out to protest police brutality, and a prison warden visited her class during Sociology Week and talked about inmates serving life sentences. And through her involvement with the Intervarsity Christian Fellowship, she explored social justice issues from a biblical perspective.

Such experiences made her want to tell stories that educate her community and help to bring about positive change – something she already started to do while at Meredith. She made a video to educate viewers about police brutality and also did a mini video series for Meredith’s Black Student Union.

“The series was intended to promote the respect and self-love we should have as Black women. We don’t always see the beauty that is within us – we wanted other people to see us and educate them as to what we have to overcome because of our blackness.”

Indyah never expected to attend a women’s college – in high school, some of her closest friends were men. Now she finds that her closest relationships and friendships are those she made at Meredith.

“At Meredith I created sisters who aren’t blood. We were trying to do big things in the world. We encouraged each other and tried to see the world differently – and we’re going to continue climbing because we’re on the same level,” said Indyah. “Being able to see my friends excel in something they’re passionate about is exciting.”

As she approaches graduation, Indyah feels ready for the next step in her career as a communications officer at North Carolina Department of Environmental Quality.

“Meredith prepared me to go into the field because of the internships I’ve held here and the leadership positions I’ve held. I love challenges and anything that will push me. As long as they see you trying – you’ll be able to succeed in whatever you do.”