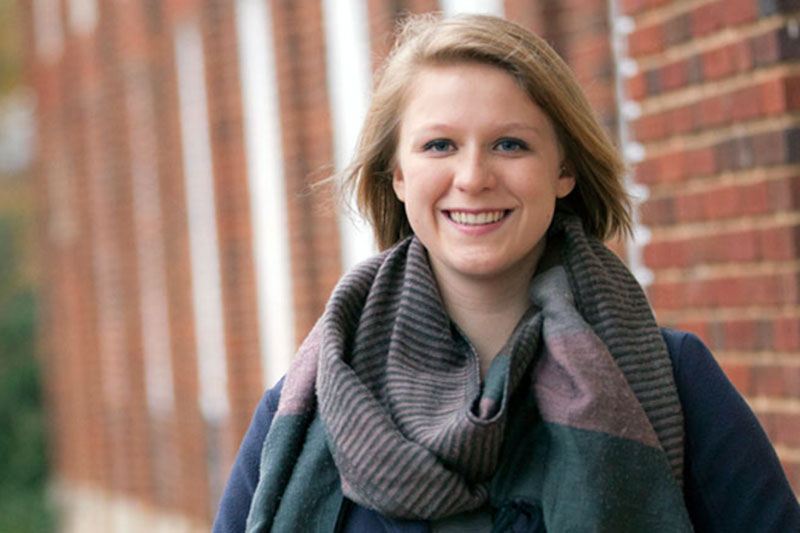 Originally a social work major, Holly was inspired by convocation speaker Chris Jordan to pursue her passion for sustainability. So she changed her major to environmental sustainability – during her junior year.

She’d been intimidated by the prospect of upper-level science and math courses, but found that she thrived studying what she loved. And she enjoyed the challenge.

Holly has used her strengths during her time at Meredith to encourage others to make sustainable choices. She was appointed the palazzo’s recycling guru while studying abroad in Sansepolcro, Italy. She's advocated for sustainability on-campus as a member of Angels for the Environment. She delivered a presentation about sustainable food systems at Meredith’s first TEDx event and researched the carbon footprint of commuter students.

Her reputation on campus as an environmental steward provided her with a big opportunity. When the sustainability-minded founders of Uncharted Play delivered the Fall 2013 Convocation, Holly was selected to introduce them. And that opportunity led to another – an internship with the company.

As a campus ambassador program liaison for Uncharted Play, Mills managed five students from around the country (including one from Meredith) as they spread the word about Uncharted Play on their campuses and in their communities.

The professionalism Holly demonstrated throughout her internship had a big impact. In April, this strong student accepted a full-time position as Uncharted Play's marketing coordinator.

After commencement – yes, she's graduating on time despite changing her major – Holly will leave North Carolina for New York City. And she couldn't be more excited.

“I cannot wait to see all that 2014 holds for me,” said Mills. “I am leaving Meredith as a strong, independent, and experienced woman capable of leaving my mark on the world.”